Last weekend, before summer went on strike, I went over to Settle (VC64) again on the train and then headed off into the countryside on foot. As usual the strategy of a planned route quickly gave way to whim with serendipitous results. The original plan was Winskill Stones which is somewhere I have wanted to visit since a teenager when Plantlife ran its campaign to buy the site. A nice site but one that could not match the image I had painted in my head, and still a little too early for the peak of the flowers. So a headed back into the shelter of the valleys below, with my attention drawn to Catrigg Force on the map - not on the planned route but too close to a waterfall to ignore so off I went.

This deep gorge had much of interest with Golden-scaled Male-fern (Dryopteris affinis sens. str.) in the humid woodland, along with Pyrenean Scurvygrass (Cochlearia pyrenaica), Large Bittercress (Cardamine amara) and Goldilocks (Ranunculus auricomus). While the beck above the falls had an abundance of Hybrid Monkeyflower (Mimulus x robertsii) in peak bloom. 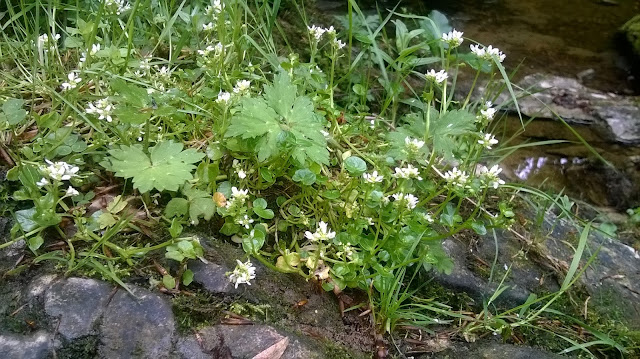 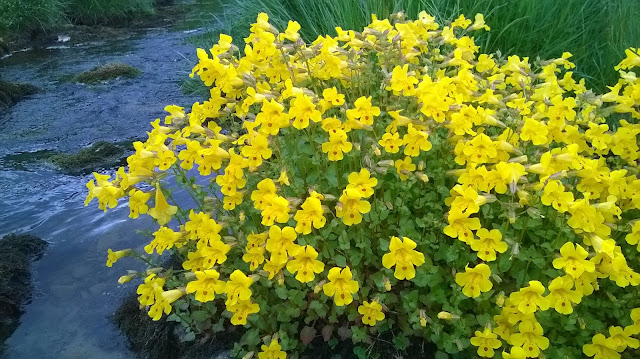 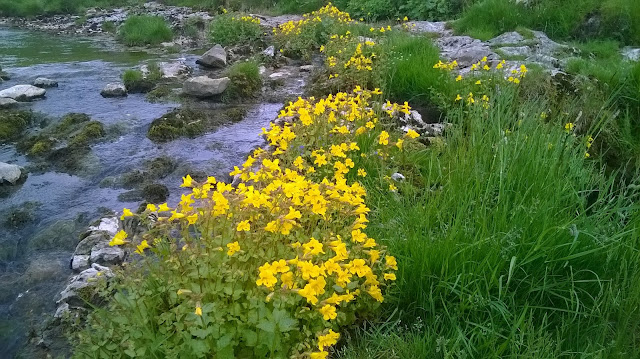 I then headed down Goatscar Lane towards the village where the banks were lush with Smooth Lady's-mantle (Alchemilla glabra). That's when the big surprise came. I have been keeping my eye out for the obscure non-native Various-leaved Hawthorn (Crataegus heterophylla) for a number of years and never expected it to pop up in this setting. How it got here is a mystery, an obscure location for a planting or for a bird-sown bush. But then I thought that with Sorbus x liljeforsii a few weeks previous. I had been starting to feel that I had been overlooking this hawthorn, so it was great to not only find it but also to see that it exactly matched the only two images (see here and here) I had managed to track down. This species is only known in cultivation, and its origin has been lost to time. It keys out in Sell and Murrell with patience and not a little trial and error, but you need enough material to understand the "stipules of leaves of flowering shoots more or less irregularly denticulate-serrate or more or less denticulate" character. Most of the stipules had no teeth (so more of the less!), a few had minute teeth (denticulate) and a few had more obvious ones (denticulate-serrate). 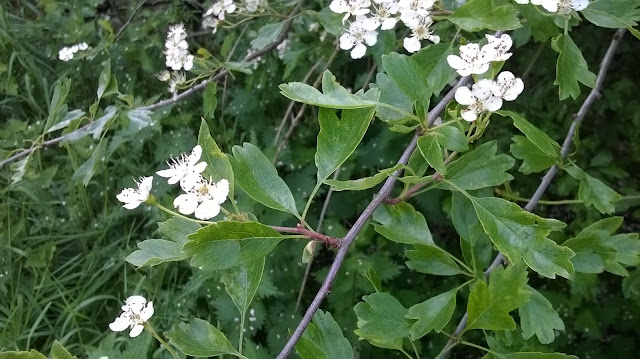 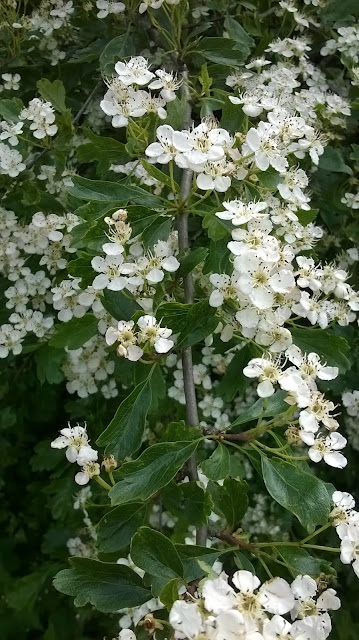 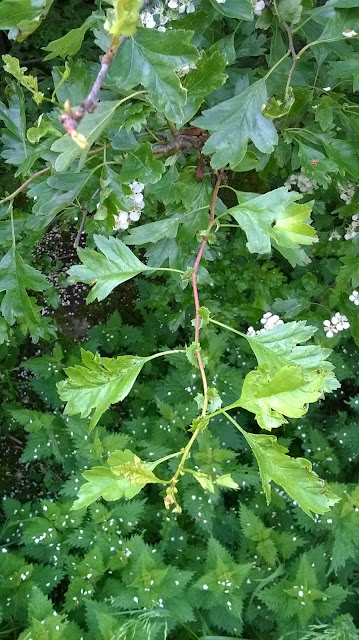 Then down into the village with more plants of definite or likely cultivated origin. No apologies for these. The native flora of the Dales are relatively well recorded, but little attention has been paid to the villages. You can't have a full picture of a region's flora without including artificial habitats.

The first thing to catch my eye on the edge of the village was three plants of Wood Crane's-bill (Geranium sylvaticum) under scrub. This is a native plant and indeed it occurs in meadows just up the hill. However, in the case the flower colour looked off for the wild plant and I think this is the cultivar 'Amy Doncaster'. A trail of plants (more typical in flower colour) led back to a garden and may support an origin as a garden escape. 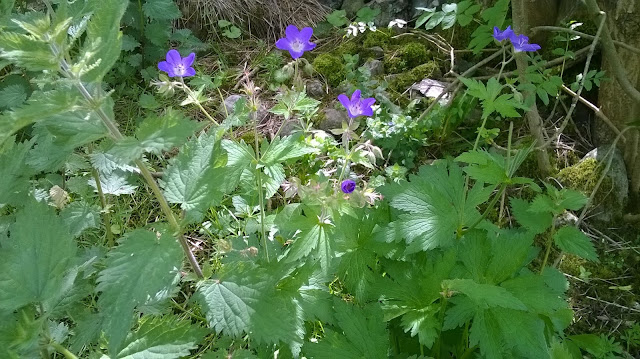 The road edge nearby yielded Spanish Stonecrop (Sedum hispanicum). The common name is a bit literal, and ignorant in the process, given this species is not a native of Spain. Next to it was Malling Toadflax (Chaenorhinum origanifolium). 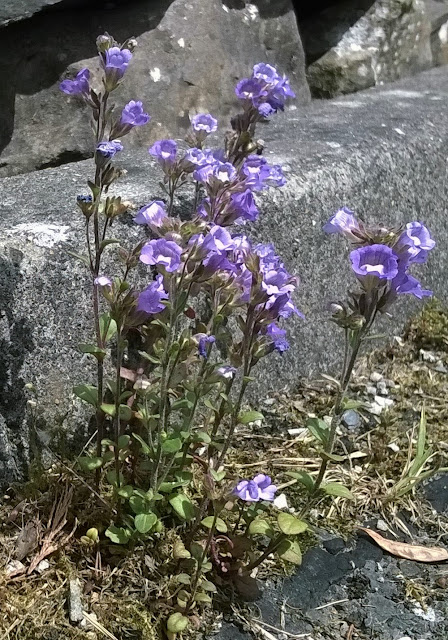 The villages of Dales are exceptional for the diversity and luxuriance of plants dripping from the limestone walls. Amongst all the usual suspects were the more notable Colarado Stonecrop (Sedum spathulifolium 'Cape Blanco') and Cobweb House-leek (Sempervivum arachnoideum). 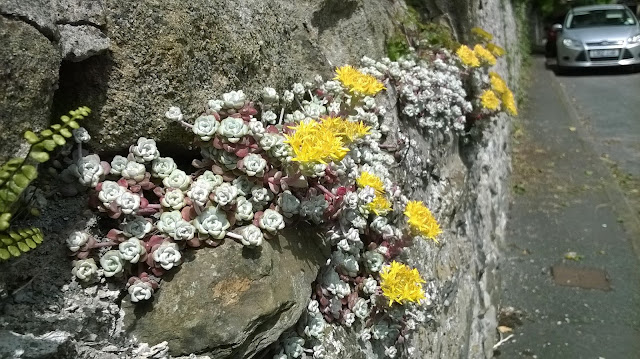 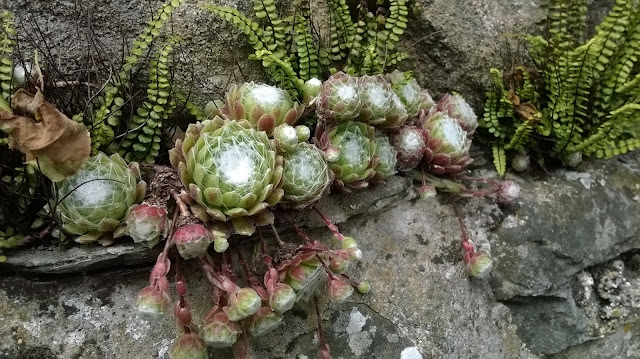 Posted by David Broughton at 18:08