A few recent records sent in by others. Barry Dickerson has found a new site for Adder's-tongue (Ophioglossum vulgatum) at St Neots, where 31 plants were seen in grassland by the railway. Barry provided the following photo. 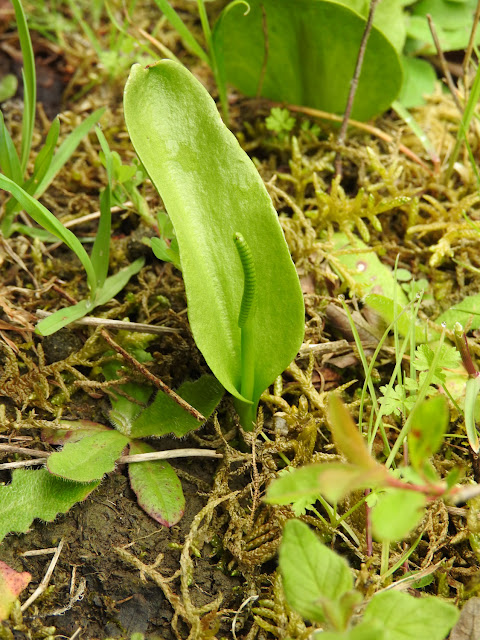 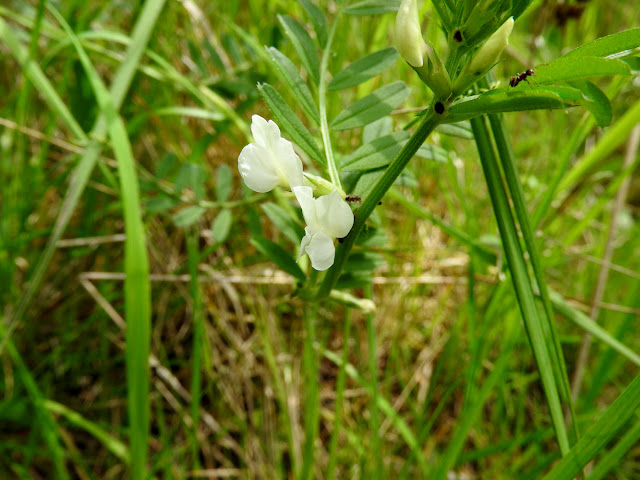 Peter Walker has been busy in the south of the county. Unfortunately I cannot disclose locations, as this is a requirement of his access permission, but he reports a new location for Soft Shield-fern (Polystichum setiferum), as well as 100's of Herb-Paris (Paris quadrifolia). The latter updates a location for this county rarity where it was last reported in 1978, so an excellent find. 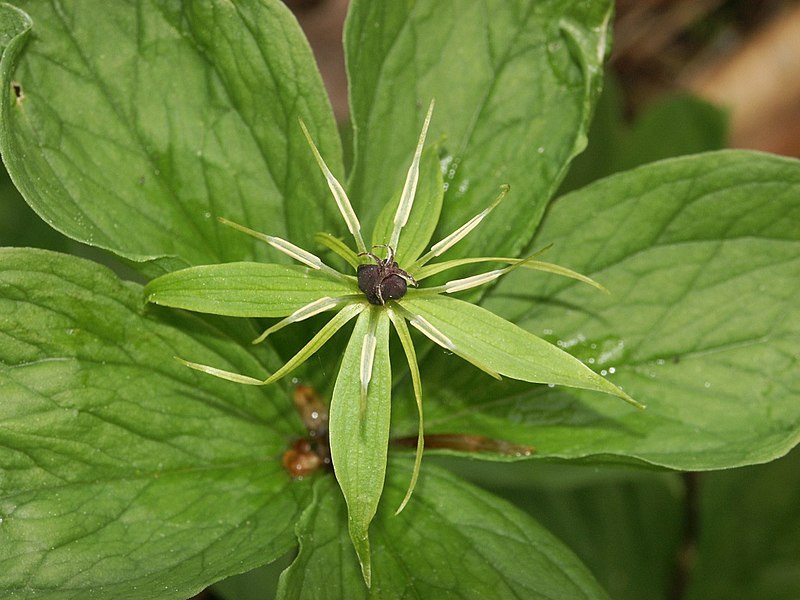 Photo by BerndH as published on Wikimedia Commons
Posted by David Broughton at 19:43 No comments:

Last weekend while the HFFS were busy in Averseley Wood and being rewarded with orchids, I spent Sunday in the far south of the county plugging gaps for the BSBI Atlas 2020 project. It turned out to be a wise choice and turned up a lot of interest, including species that might have been missed if I had been only a few weeks earlier or later or taken a slightly different route. A lot of the time botanical recording does seem to be as much, if not more, about serendipity as it is about planning, something that can be lost when targets and recording plans are allowed too much sway in decision making.

Within ten minutes of parking the car and walking up Hardwicke Road, I came across the first big find of the day. A large and previously unrecorded colony of Crosswort (Cruciata laevipes) - for those outside the county this may not sound that interesting but it is a mega rarity in this part of the world. 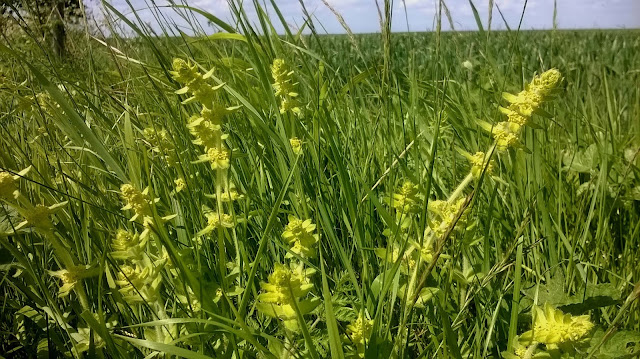 Further along the lane, and the first of several sightings that day, was Rough Hawk's-beard (Crepis biennis). There are few historical records for this species and, given it is easily overlooked as yet another "yellow compositae" and can go over early, I suspect (based on the number of records made on one day) that it is under-recorded in the south of the VC.

Sands Lane gave Rock Crane's-bill (Geranium macrorrhizum 'Bevan's Variety') in the corner of a plantation, only the 3rd record of the species. 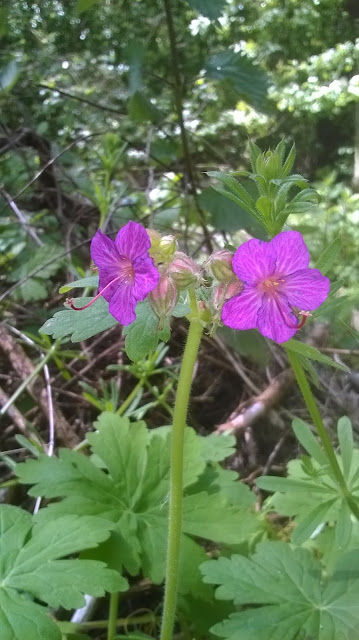 A tour of the lanes provided a range of other notable finds, including Spotted Medick (Medicago arabica), Grey Sedge (Carex divulsa subsp. divulsa), Spurge-laurel (Daphne laureola) and Chinese Teaplant (Lycium chinense). The identification of the latter has been clarified in recent years and I am starting to suspect that the truism that it is much less common than Duke of Argyll's Teaplant (Lycium barbarum) is premature, at least in this part of Britain. 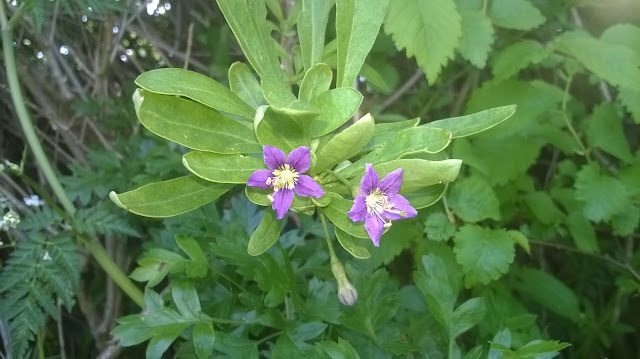 Moving on to Abbotsley, which also had Rough Hawk's-beard, the best find was a new species of pink-sorrell for the VC. Large-flowered Pink-Sorrell (Oxalis debilis) was found naturalised in the grassland of the churchyard. 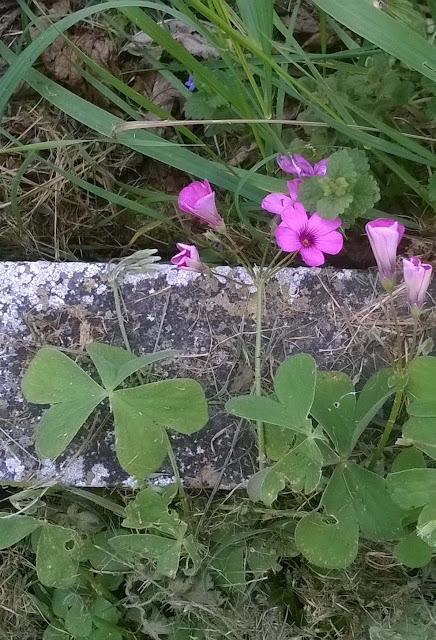 Posted by David Broughton at 10:58 No comments:

A productive day in the south of the county, with more news to follow. However, first off here is a new comfrey for the VC - Caucasian Comfrey (Symphytum caucasicum). A fine large stand of this garden escape is present on a roadside bank in Waresley village. This has to be the most attractive comfrey species, but beauty comes at a price as it is really invasive. That said, when I found it new to VC64 I could not resist a cutting for my garden BUT I definitely selected where to plant it with great care! 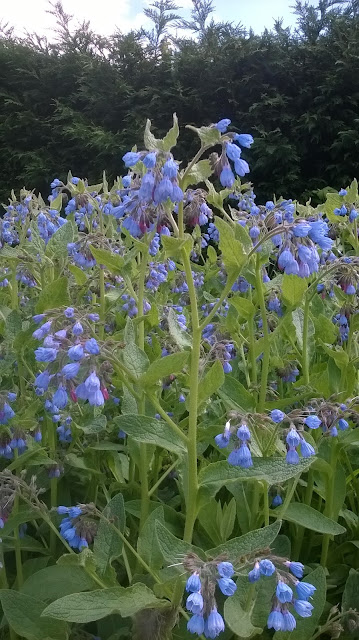 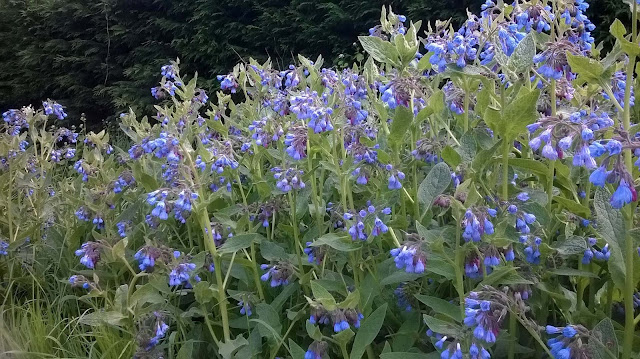 Posted by David Broughton at 20:51 No comments:

Following on from the previous post on Little Mouse-ear, I had another spot of luck yesterday and stumbled across a thriving colony of another West Yorkshire rarity - Round-leaved Crane's-bill (Geranium rotundifolium). This species is distinct from the other commonly encountered annual crane's-bill in that the petals are entire and not notched. Thirty-five plants were found at the base of a wall on Fleet Lane, Oulton (VC63). 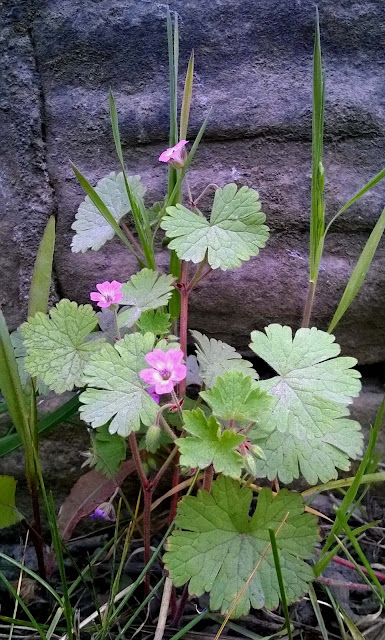 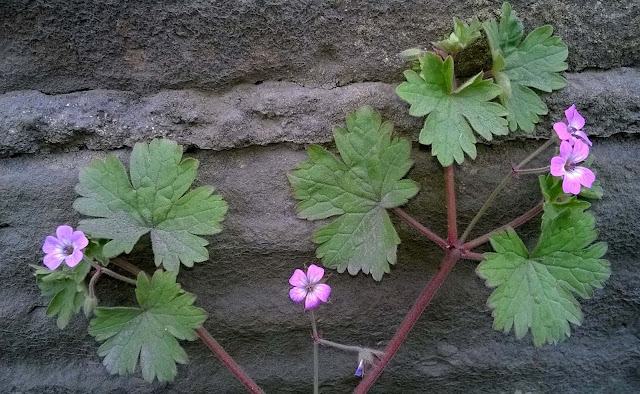 Posted by David Broughton at 09:50 No comments:

This weekend has been a traditional May Day affair, i.e. cool, squally, overcast and generally not encouraging of explorations far from home. So I stuck to a brief walk on my local patch, but in the event that proved more productive than I could have hoped. I wandered down to the Aire & Calder Navigation below Rothwell Country Park (VC63) and up onto an area that was historically the railway for Rothwell Colliery but is now short grassland over a free-draining substrate of clinker. Just the sort of place where you think winter annuals, and then get down on your hands and knees (or near as) to see what you can find.

It is classic habitat for Little Mouse-ear (Cerastium semidecandrum), a species I had looked for here in a previous year with no success. So I was pleasantly surprised to find numerous plants. This is a very rare species in West Yorkshire and the last record for this hectad (the Wakefield hectad SE32) appears to have been before 1888. It is so rare that the Flora of West Yorkshire (prematurely as it later turned out) declared it extinct, with this hectad being the only known historic location. 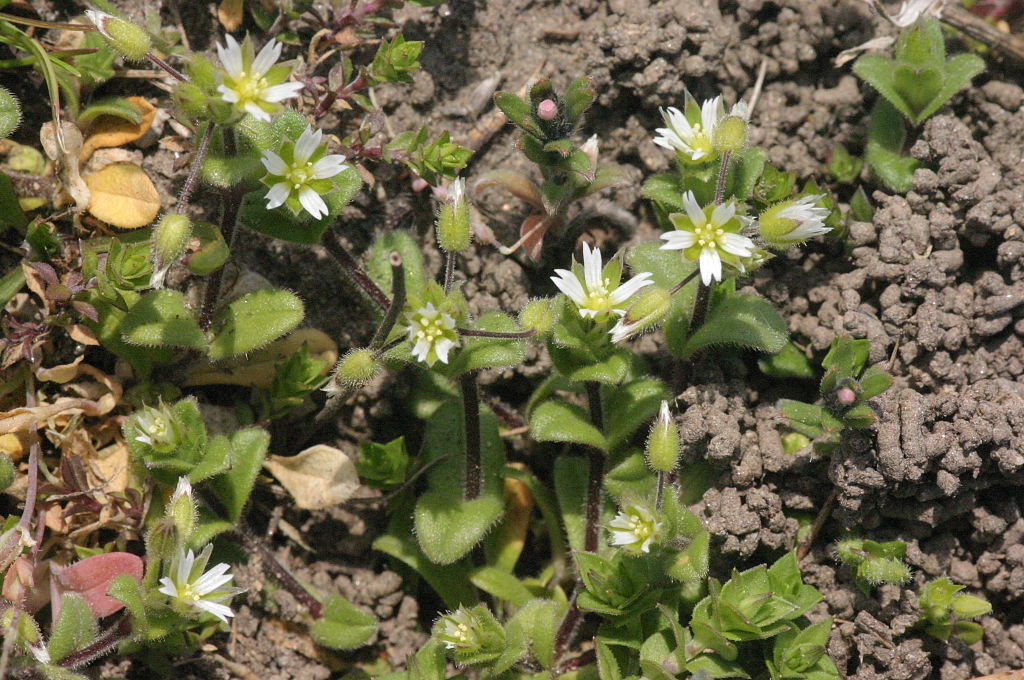 Photo by Hermann Schachner as published on Wikimedia Commons

I am in no doubt that part of the reason it seems so rare is that it flowers early and then dies off, and also because it can by very tiny. Below is a typically plant from my location shown against a 1 pence coin. This plant was flowering and fruiting. 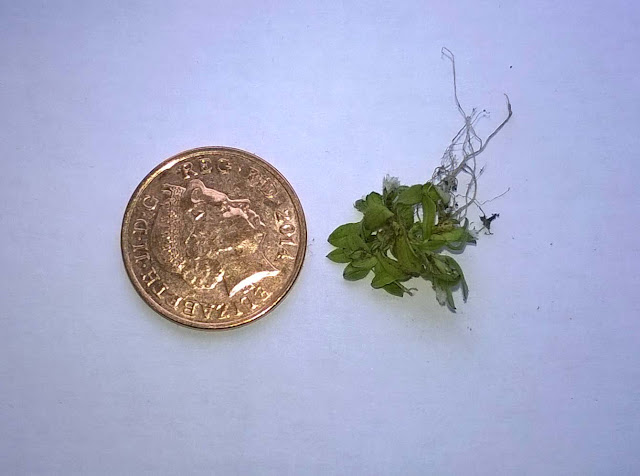 Posted by David Broughton at 12:27 No comments:

This is one of those nice hybrids that tries to make everyone's lives a little easier by combining clear intermediate traits (cream flowers versus the yellow flowers of the American parent and the pure white flowers of the Asian parent) with hybrid vigour. That said, white-flowered hybrids also exist, but again appear to show clear hybrid vigour (e.g. the cultivar 'Billy'). The cream-coloured hybrid sometimes goes by the cultivar name of 'Devonshire Cream', which is a nice summary of the specific colour-shade of the flowers, while others describe it as primrose-yellow. Mike has kindly sent some photos, see below, that allow a compare and contrast of our plants. 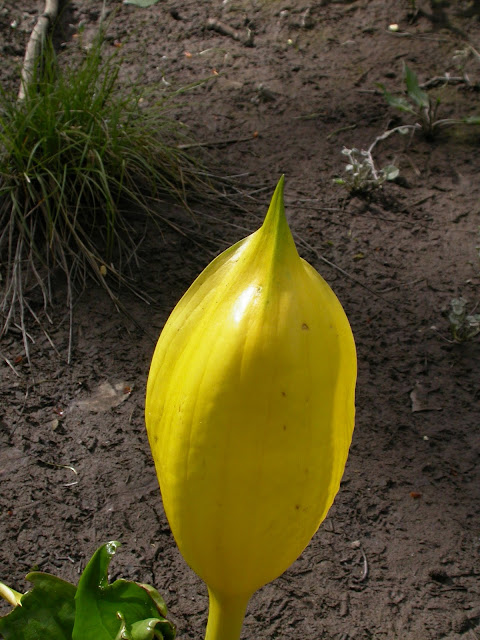 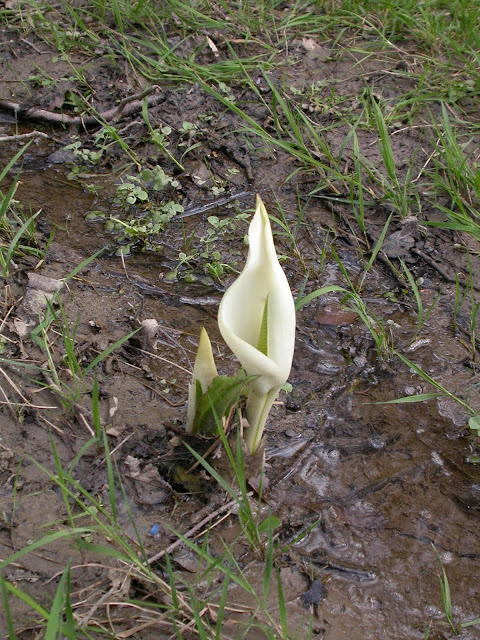