The last couple of weeks has seen a small flurry of interesting records come in.

Brian Laney has been in Huntingdon leading to a chance encounter with Four-leaved Allseed (Polycarpon tetraphyllum), a first record for the county. This is a summer annual of drought stressed habitats. It is native to the south coast, but has been spreading in recent years. The reasons for this are obscure. In part the horticultural trade may be dispersing it, but it may also have been aided by our changing climate. Various drought tolerant species have been expanding their range in VC31 in recent years, Bee Orchid (Ophrys apifera), Pyramidal Orchid (Anacamptis pyramidalis) and Knotted Hedge-parsley (Torilis nodosa) being particularly prominent examples.

photo by Forest & Kim Starr (Wikimedia Commons), not ideal as seems to be the two leaved form, but you get the gist

He also found Annual Beard-grass (Polypogon monspeliensis), providing a useful range extension. This species is common at Hampton, Peterborough where I took this photo last year. 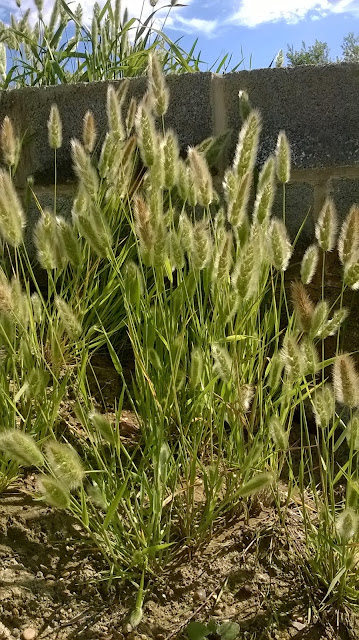 Fred also pointed out Golden-scaled Male-fern (Dryopteris affinis), providing confirmation of the presence of this species as well as the previously reported Borrer's Male-fern (Dryopteris borreri). The former has been mooted in the past but was not confirmed by an expert or claimed with confidence.

Posted by David Broughton at 21:24