A Headache of Hawthorns

The 3rd Edition of Stace back in 2010 introduced Large-sepalled Hawthorn (Crataegus rhipidophylla) to British botanists, and encouraged me to start looking at hawthorns more closely. Away from ancient woodlands it was perhaps too easy to get blasé and expect Hawthorn (Crataegus monogyna) or its hybrid Crataegus x media. Sure enough, I first met with this species in Lincolnshire and I have found it in scattered locations thereafter. It is not common and, currently at least, is primarily of planted origin. However, it is undoubtedly under-recorded and other botanists should be looking more critically.

Large-sepalled Hawthorn stands out in the spring with its early and large flowers. The leaves are distinctive being redolent of Wild Service-tree (Sorbus torminalis) in outline with a saw-edged base to the leaf. In the autumn the large and typically barrel-shaped fruit appear and typically have erect sepals (depending on variety) that are longer than wide. What is also distinctive in the autumn is the early colour change and leaf drop, which starts in October well before Hawthorn and its kin. 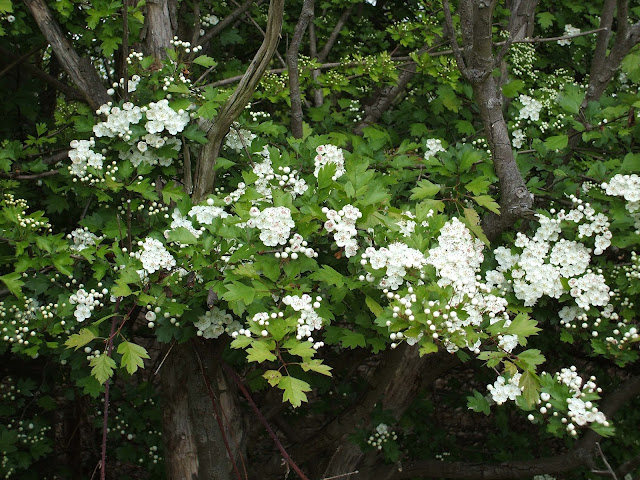 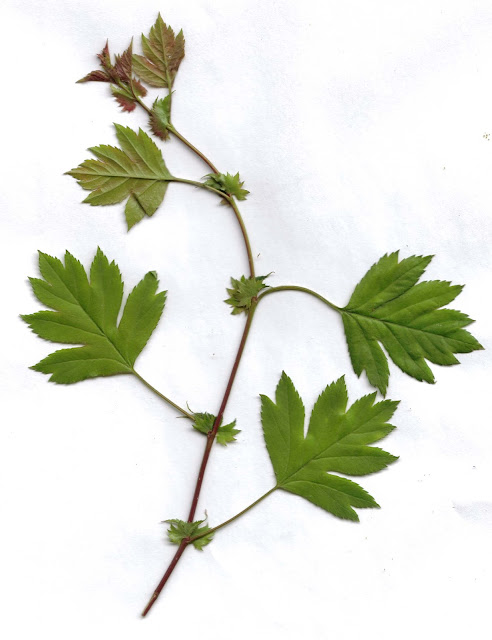 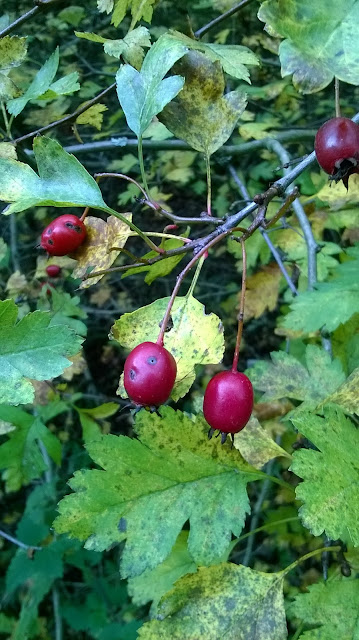 Much more common than Large-sepalled Hawthorn is its offspring with Hawthorn i.e. Crataegus x subsphaerica. Indeed, having targeted this species this October I can say it is very common, undoubtedly overlooked and likely to be a real headache for botanists in the future. What has become most apparent to me over the last few weeks is just how variable this species is. In some guises it can easily be overlooked as Hawthorn or Crataegus x media when not in fruit. By the time the BSBI starts to think about the next Atlas (after the current 2020 project) it will likely be so ingrained in our countryside that we will become dependent on examination of fruit for definitive identifications.

When I first found C. x subsphaerica it was as the optimal form for ID i.e. hybrid vigour, leaves with the outline and toothing of Large-sepalled Hawthorn but the dissection of Hawthorn (forms with the influence of the heavily dissected monogyna f. schizophylla are particularly distinctive), and large fruit with erect sepals. However, all intermediates occur and now is a good time to look while leaves and fruits are still present. The leaves on different bushes can show every range of variation between the two parents. Leaves may have the saw-edge of Large-sepalled, or this can be reduced or vary from leaf to leaf, or can be absent entirely. The fruit size can vary from small to large. However, if there are erect sepals on the fruit (nothovar. domicensis) you can be confident of the ID. Note this character develops as the fruit mature, so don't make assumptions based on immature fruit. 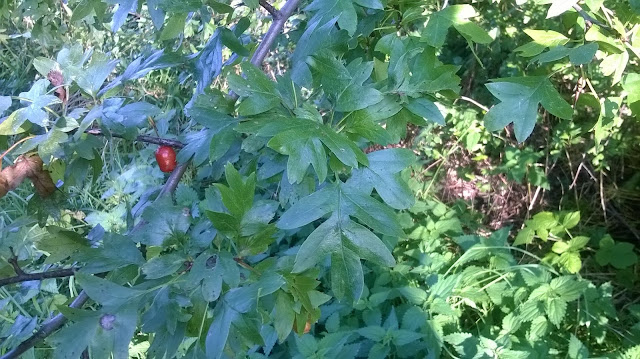 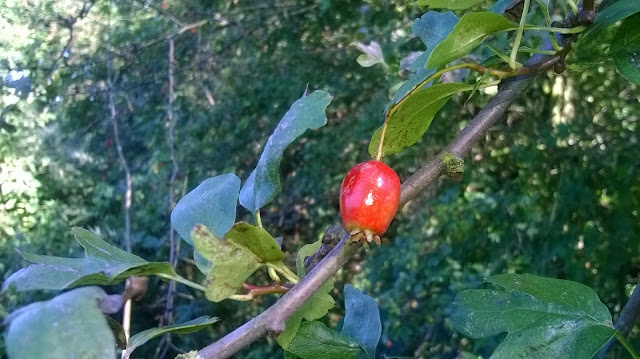 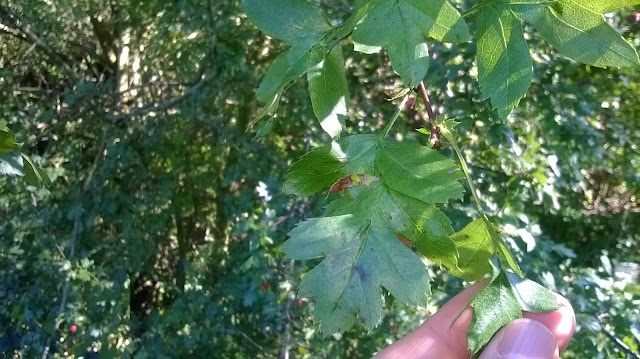 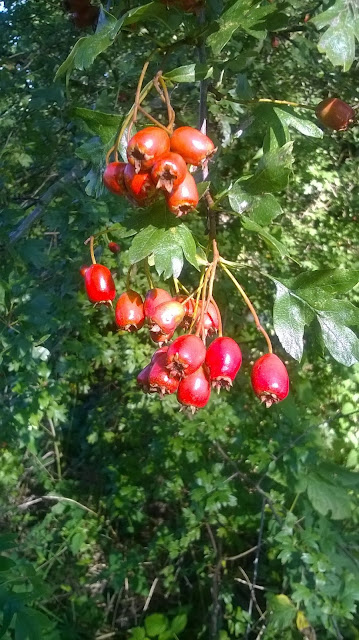 This is the current distribution of the hybrid based on data in the BSBI database, and reflects where people are looking rather than the true distribution. It will only be the tip of the iceberg. My experiences around my local patch will undoubtedly be replicated across much of England and Wales, if not the UK as a whole. 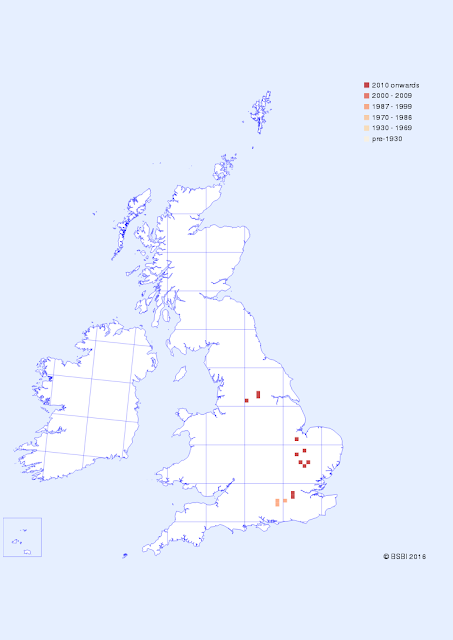 Finally, to round off the hawthorns, a return visit to the fabulous large fruited (>1cm) form of Hawthorn (var. splendens). It is a stunning sight when you meet a bush of this in full fruit, dripping like jewels in a particularly vibrant shade of red. Despite the fact that this variety only occurs at very low density, i.e. one or two bushes here or there, it does seem more than a chance mutation. While the fruits of var. monogyna (and subsp. nordica if you follow Sell & Murrell, but the distinction betwen subspecies monogyna and nordica does not seem worth maintaining) and var. splendens do seem to vary in size on a single bush there does seem to be a well marked cut off in the size ranges between the two varieties. In other words, the fruit vary in size around their respective means, but do not grade into each other. A reasonable working hypothesis to explain this might be that the latter has a higher ploidy level. 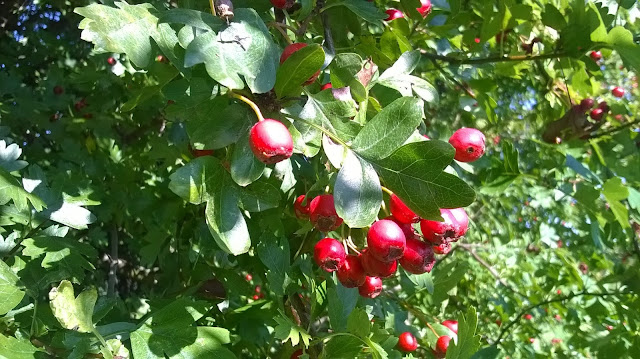 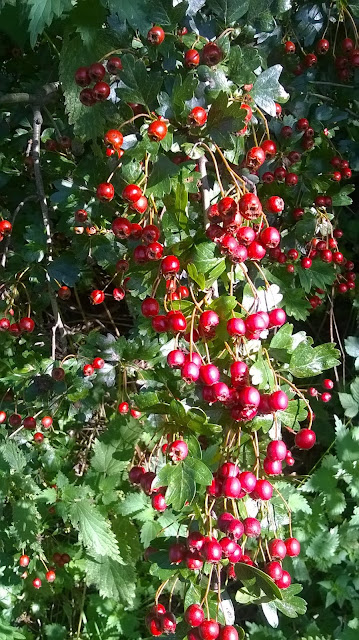 Posted by David Broughton at 20:13 No comments:

Sewage Works are not the most glamorous of locations but they are always interesting places to visit (with work I should add - not my normal idea of a good day out!). This time of year is particularly good when all sorts of rarities pop up in composting and other marginal areas.

Yesterday rewarded me and my colleague Hannah with several plants of the stunning Apple-of-Peru (Nicandra physalodes var. violacea) at Esholt (VC64). The colour and size of the flowers never fail to impress and seem out of place on a grey autumn day. 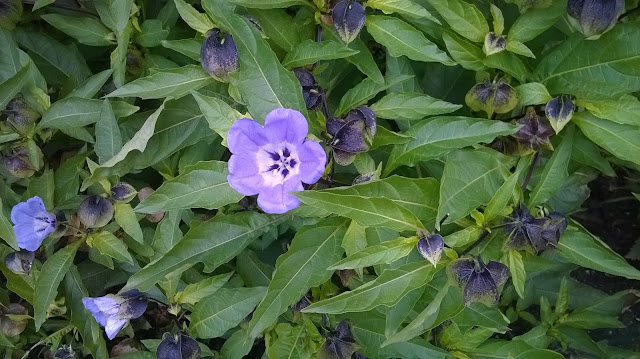 We were also rewarded with a single plant of Cape-gooseberry (Physalis peruviana), unfortunately not in flower. Here are a couple of photos taken at Knostrop, Leeds (VC64) a couple of years back. It has also been seen recently elsewhere in the VC near Spofforth. 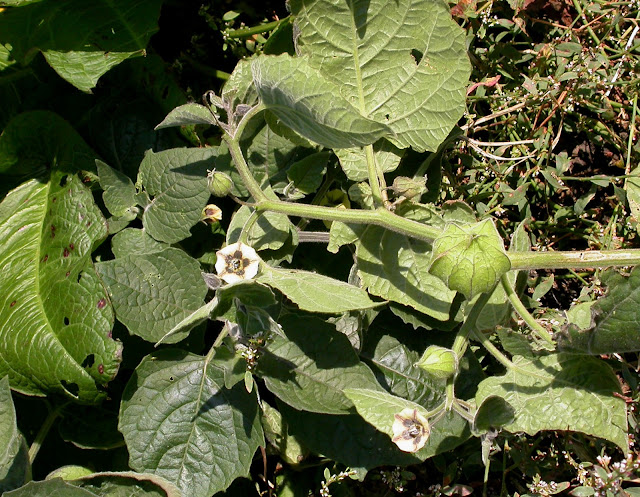 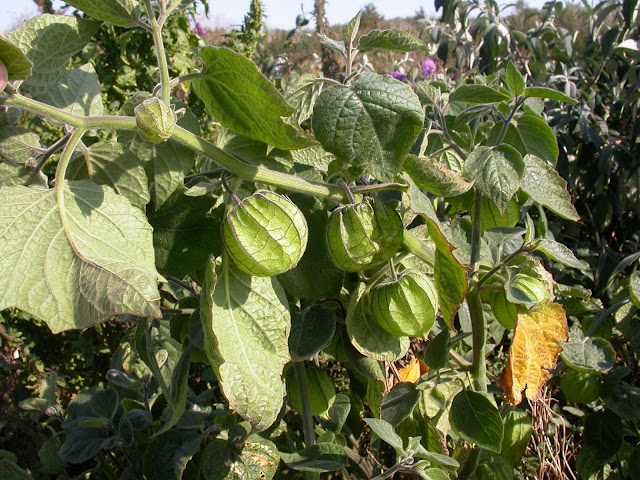 And to round off an interesting trip we found one plant of the hybrid between Oxford Ragwort and Sticky Groundsel (Senecio x subnebrodensis) growing with both parents. I was too excited to take a photo, but there is a reliable image here. This find nicely updates an old record for this area by Jesse Tregale.


Posted by David Broughton at 20:13 No comments:

Lynne Farrell found Floating Pennywort in the River Great Ouse at Hemingford today. This is a very invasive non-native species that will hopefully be eradicated before it has chance to establish. It would be very unfortunate if it got a foothold and then moved onto colonise the important gravel pit complexes along the river. 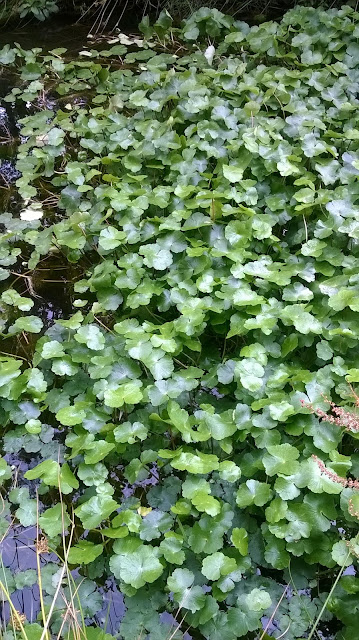 Floating Pennywort is a native of North America, but was introduced to Britain by the horticultural trade as an aquatic ornamental. As is too often the case with aquatics, it is a bit of a thug and once it starts to take over its not long before someone thinks it a good idea to turf it out into the nearest watercourse. Spread is somewhat inevitable after that, with this species capable of growing 20cm per day.

This species is well established at Bedford (VC30), so there is a high chance of it being washed downstream into Huntingdonshire. Please keep your eyes peeled, and if you see it report it via the Plant Tracker website or phone app, or by email to alert_nonnative@ceh.ac.uk.

For readers from Yorkshire, it is also depressingly frequent in the Rivers Don, Aire and Calder.
Posted by David Broughton at 19:58 No comments:

Wetland habitats still maintain some interest at this time of year, providing a 'last hurrah' before winter. St Aidan's (VC64) proved this last weekend with good numbers of Marsh Dock (Rumex palustris) still going strong. This is not a species I remember seeing here before, and it may be that I have missed it because it peaks late in the season. 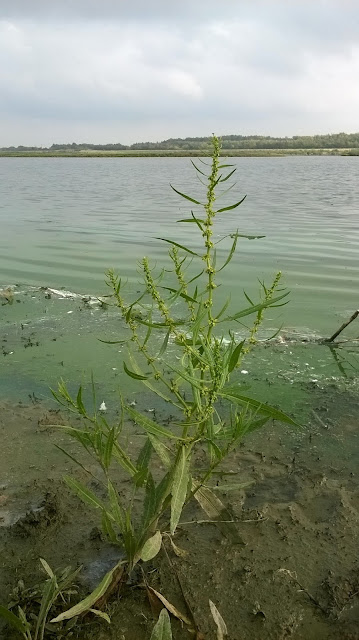 This species has a primarily Eastern England distribution. It is widespread but scarce in Huntingdonshire, but is exceptionally scarce in VC64 where it seems to be restricted to wetlands along the Aire Valley. I wouldn't be surprised if it occurs elsewhere e.g. in the Ripon area, and it may be overlooked because of its phenology and also because many of the wetlands it favours have no public access or only restricted access to marginal habitats.

Posted by David Broughton at 19:45 No comments:

Slender Bulrush - New to VC64 and Beyond?

Slender Bulrush (Typha laxmannii) is widely established in the aquatics trade but doesn't seem yet to have been recorded as escaped in Britain. I'm sure that will change in the future. It turned up in a reservoir I was surveying in Skipton where it had clearly been bunged in, along with a range of other non-natives, by anglers. It seems to have been there for a few years and scattered stands around the margins indicate it is spreading and establishing at this site. 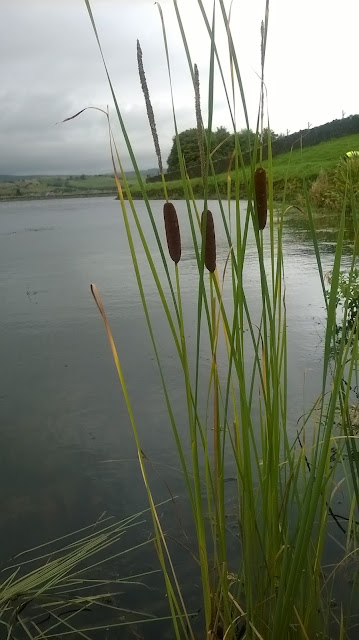 My eye was first caught by the very narrow leaves on a non-flowering clump and my first thought was Flowering-rush (Butomus umbellatus), only realising my mistake when spotting the flowers and looking closer at the leaves. It is closest in appearance to the native Lesser Bulrush (Typha angustifolia), but it is a dwarf in comparison. There may be situations where environmental conditions serve to dwarf Lesser Bulrush, but in my experience bulrush species are pretty resilient. Certainly the growing conditions at this site were very favourable for bulrushes, with this species growing at a depth of 0.7 to 1m (perhaps greater depth given I recorded it during the summer draw-down period).

Postscript: originally I stated this record was from VC63, however I was in error and it is well inside VC64. The joys of a county boundary based on the meanderings of a watercourse!
Posted by David Broughton at 20:47 No comments:

So as not to leave Huntingdonshire out, here is a quick catch up on recent sightings.

Barry Dickerson had Caper Spurge (Euphorbia lathyris) pop up in his garden in Eynesbury. This species is only of scattered occurrence in the VC and is generally found close to habitation. This is one of my favourite plants, a combination of its alien looks and it being one of the first plants I noticed as a kid. The photo is by Barry. 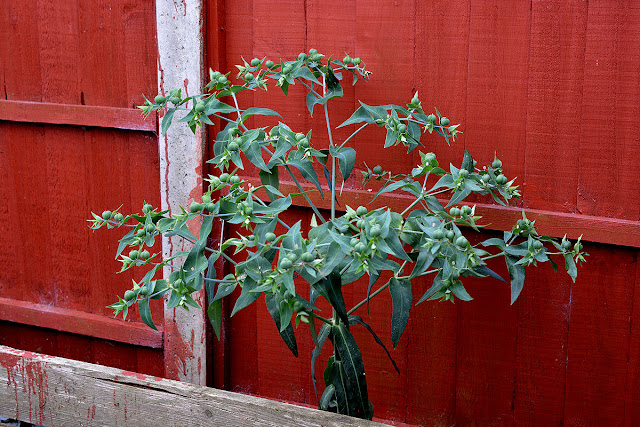 Lynne Farrell and Barry have been out around Bluntisham and Lynne noted a new colony of Birthwort (Aristolochia clematitis) not far from the long known colony behind the Baptist Church. This species has persisted at this location since at least 1949, when it was first reported. 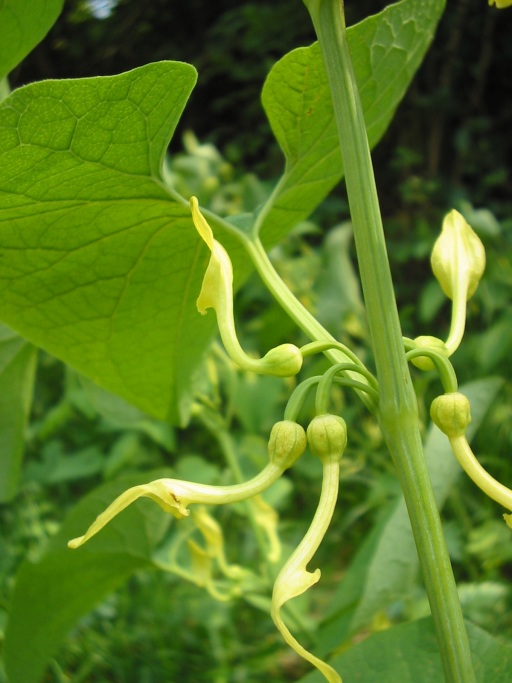 Lynne also found an old pear tree nearby that seems to be Wild Pear (Pyrus pyraster). At first the location seems a bit incongruous, but as this area used to be orchards it is possible that it was planted to serve as a pollinator for the fruit crop. Normally this species is found as an odd tree here and there on the edge of ancient woodland and in ancient hedgerows. Photo taken by Lynne after retrieval from the compost bin to double check a few measurements! 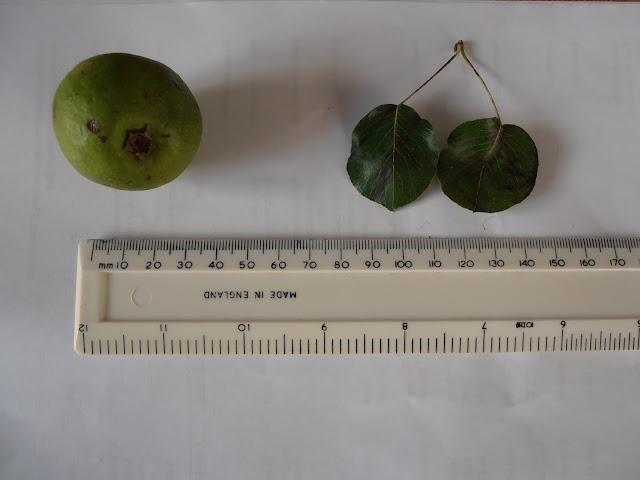 A quick catch-up on recent news.

Mike Canaway has spotted Perennial Sunflower (Helianthus x laetiflorus) in rough grassland off Stackhouse Lane, Giggleswick. This is a striking but rare garden escape in VC64.

Photo by SB_Johnny from Wikimedia Commons

Jonathan Shanklin has paid the county another visit, for a week of intensive botanising in the Pateley Bridge area. His sightings include ... 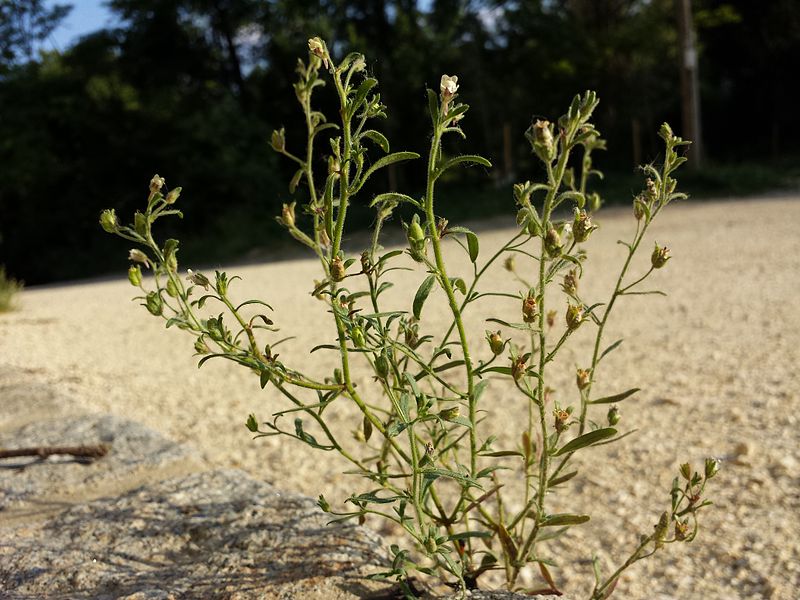 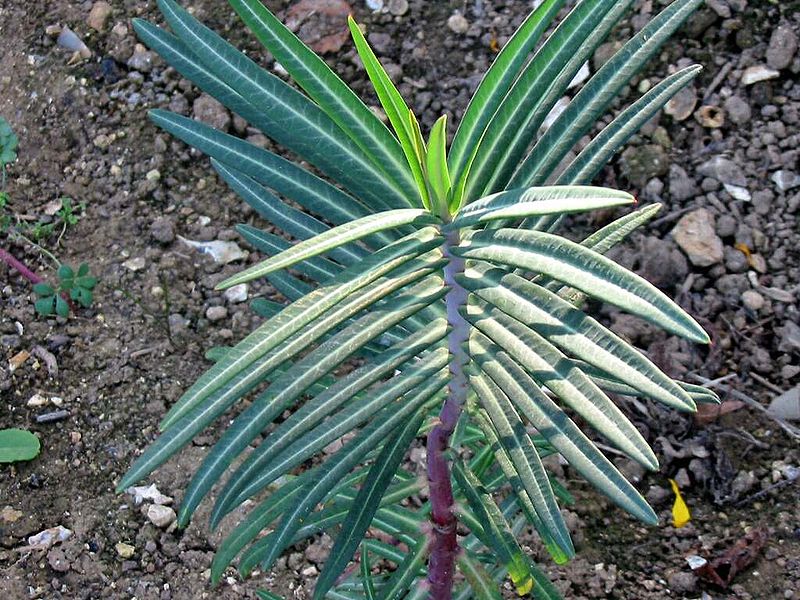 Meanwhile, I have had the following: 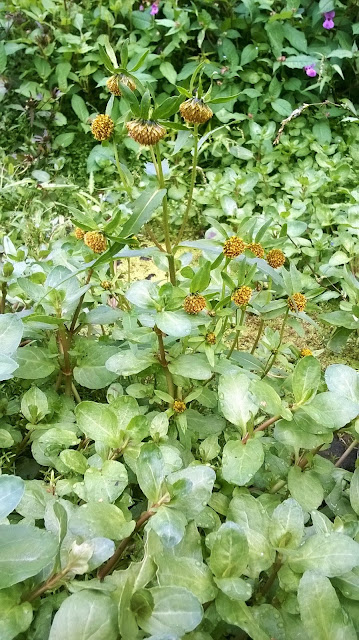 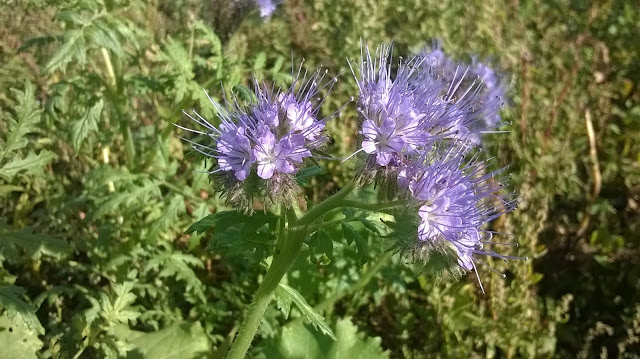 Phacelia (Phacelia tanacetifolia) as a casual in an arable field at Aberford, just what is needed to brighten an October day
Posted by David Broughton at 20:18 No comments: