Mike Wilcox and Jesse Tregale were botanising at Swinsty Resevoir this weekend and came across this oddball. A completely glabrous Marsh Cudweed (Gnaphalium uliginosum). Jesse subsequently tracked down the name var. glabrum in Wolley-Dod's1970 Flora of Sussex. Probably more a chance mutation than a true variety, but a fine plant nonetheless and it will be interesting to see if it breeds true and persists over-coming years. 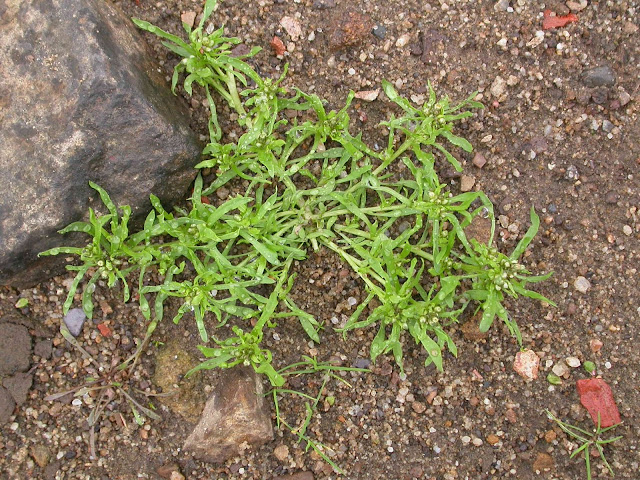 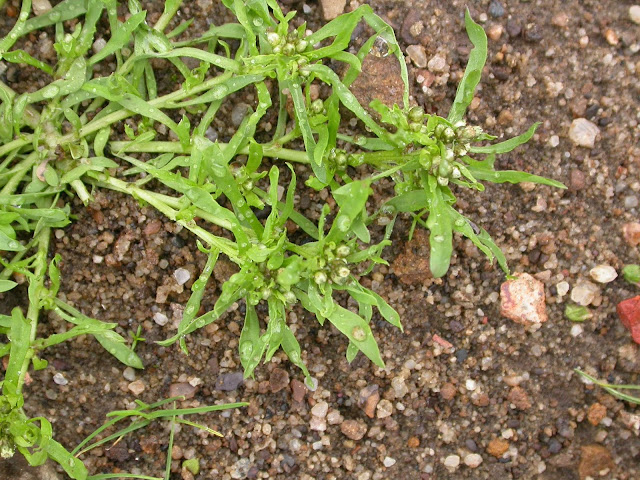 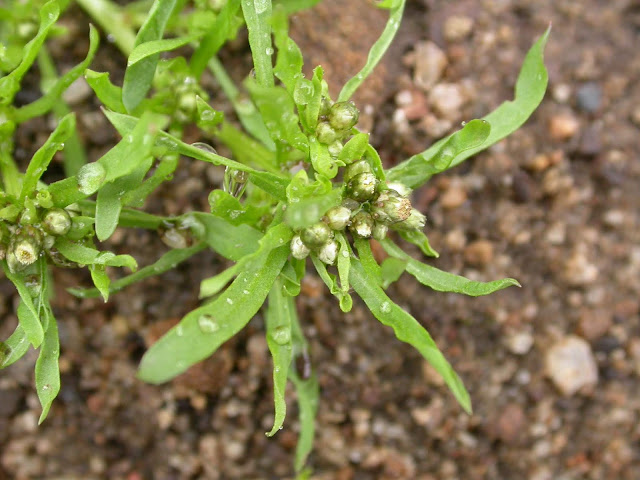 Posted by David Broughton at 16:38 No comments:

Its good to have some news from Huntingdonshire. Alan Leslie sends details of Spotted Spurge (Euphorbia maculata) found growing in the corner of the car park at Waresley garden centre in the far south of the county. This is a species that seems to be on the spread, particularly in urban habitats. One to look out for over coming years.

The following photograph, showing the plant in typical habitat, is by Stefan Lefnaer as published on Wikimedia Commons. 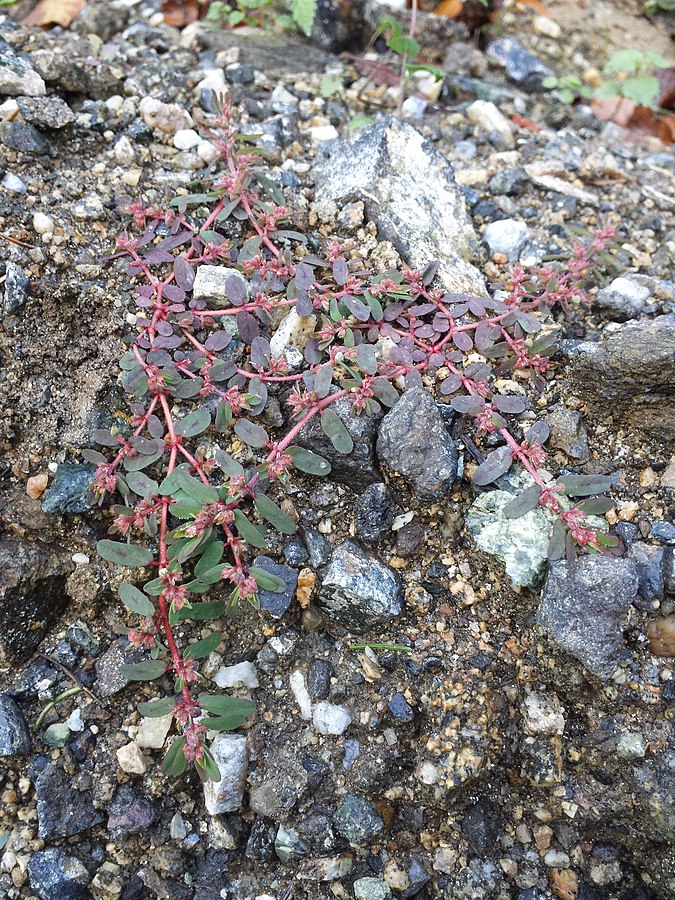 Posted by David Broughton at 20:11 No comments:

Email ThisBlogThis!Share to TwitterShare to FacebookShare to Pinterest
Labels: Euphorbia

The Draw of Drawdown

Mike Wilcox sent me interesting news this week that left with me with mixed feelings. He had popped over to Skelton Lake, part of my local patch, and found Mudwort (Limosella aquatica) - a cracking find and the first for the Aire Valley (at least in living memory if not all time). I was pleased because I had been expecting and hoping that this species would turn up, tempered by annoyance that if my weekend walk had taken a slightly different route then I would have got it first!

So naturally I went for a look this weekend and to take a few pictures. In so doing, I was able to extend it even further into the VC64 part of the lake. 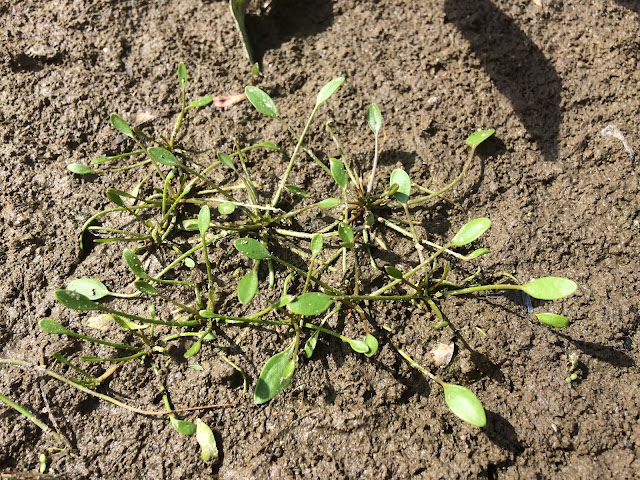 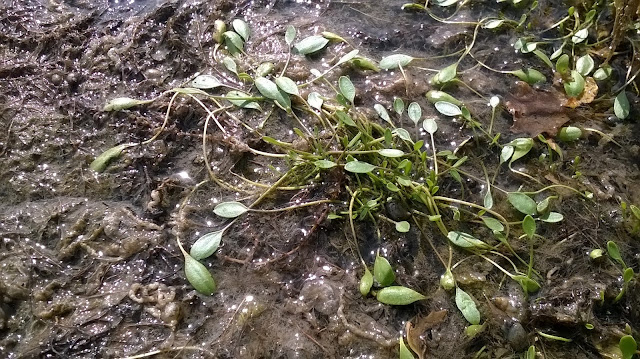 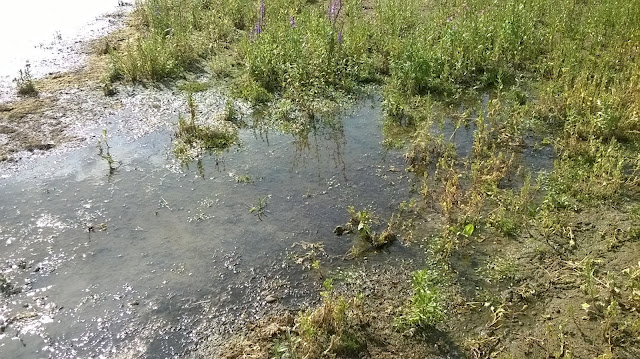 This really has been an exceptional year at this site, with water levels dropping consistently over the summer. In recent years rain in summer has re-filled the lake, putting an end to the drawdown season before it had fully got going. The Mudwort has joined the other recent cracking finds of Grass-poly (Lythrum hyssopifolium) and Golden Dock (Rumex maritimus).

A range of other species were putting on a good show. Including this really robust Persicaria. I really wanted this to be something different, it is so striking with its spotted robust stem, distinct nodes, multiple stems arising straight from the root stock and decumbent at the base, and sub-glabrous leaves. But I had to face facts, it was just a form of "Pink" Persicaria (Persicaria lapathifolium subsp. lapathifolium - in my view the circumscription of this in Flora Nordica seems more usable than the more recent one in Sell & Murrell, which under-describes the diversity of the two subspecies). Normally a plant this distinct and forming a distinct population would merit a name (of whatever rank), but the trouble with the Persicaria's is that they are autogamous, throwing up new variants which then breed true. Perhaps if its more widespread ... let me know if you've seen it elsewhere. 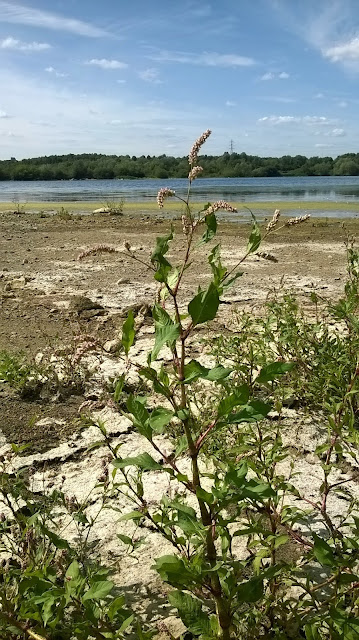 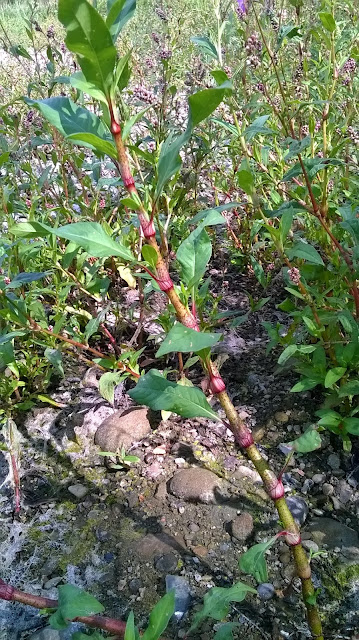 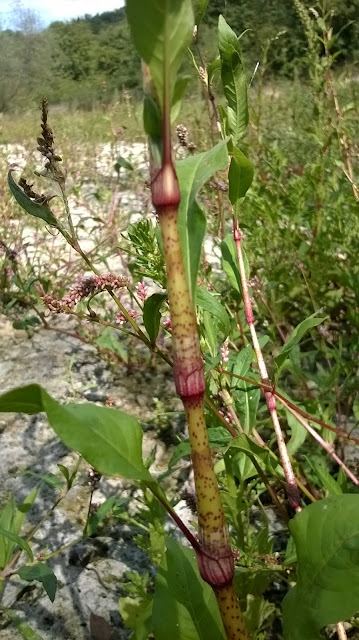 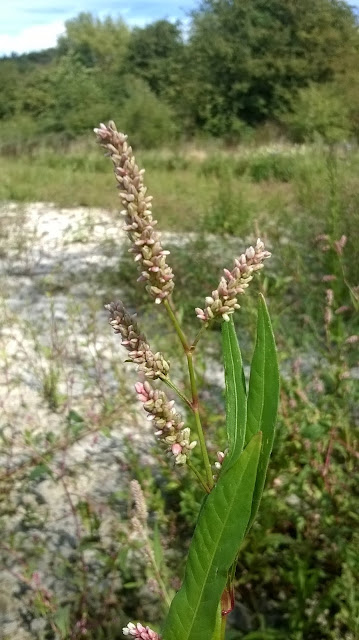 It was also nice to see the "Intermediate" Plantain (Plantago major subsp. intermedia), making its 2018 appearance on the strandline. 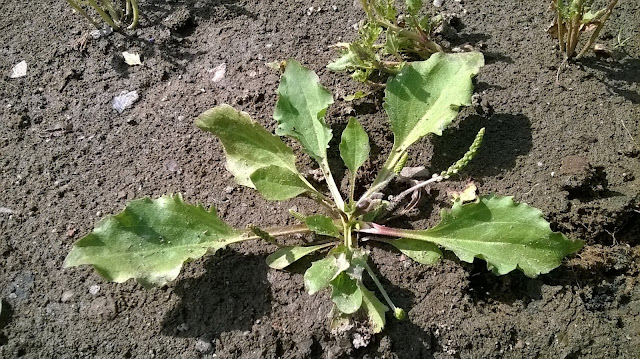 Unexpected, and again first seen by Mike, was this sunflower (Helianthus annuus). 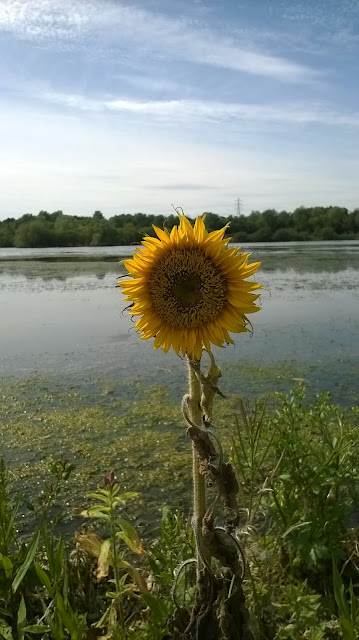 All this, without mentioning the knotgrasses. That's a subject for another day, but as a taster, Polygonum microspermum. A delightfully dinky species with blue-tinged foliage and tiny flowers. Seems quite a reasonable split to me, especially when seen growing in the 100's. 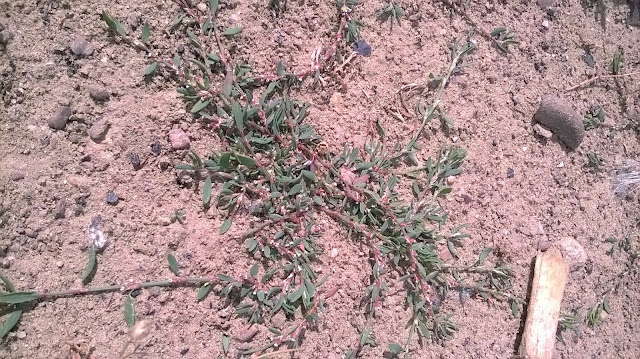 Posted by David Broughton at 21:07 No comments: