Invasion of the False Natives

Lookalikes (species similar to and planted in mistake for native species) and false natives (infraspecific taxa of foreign origin) have slowly been growing in profile over recent years following Peter Sell bringing these to a wider audience, and then the inclusion of a number of such plants in Edition 3 of Clive Stace's New Flora of the British Isles. But there is still some way to go in understanding the true distribution of these taxa, and the long term implications of 30 years zealous tree and shrub planting as quick fix habitat mitigation and creation.

Southern Dogwood (Cornus australis or Cornus sanguinea subsp. australis) is one good case in point, with the following map showing a rash of dots across central England. This species is almost ubiquitous in recent plantings in VC31, and is increasingly being found bird sown. A similar picture is building in VC64. My personal view is that this isn't a trivial matter. Southern Dogwood seems to grow more vigorously and forms a much denser bush, so I can see it being a problem for habitat managers in the future. It is obvious why horticulturists have favoured it as it has larger flowers and leaves than the native plant, produces a neater denser bush and has brilliant autumn colour. 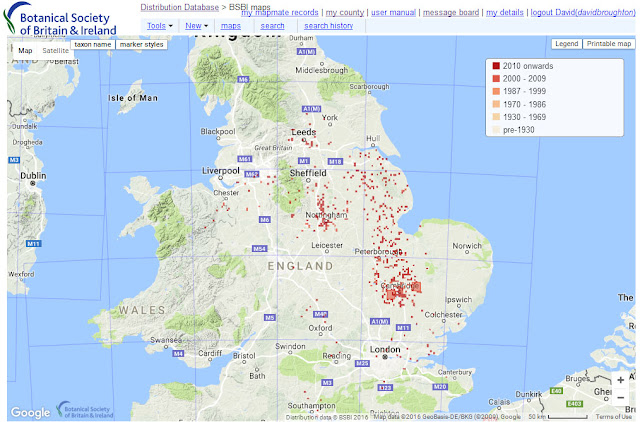 The characters used in keys to distinguish it from Dogwood (Cornus sanguinea) are subtle and based on the number of leaf veins and the morphology of leaf hairs, but this belies the genuine differences between the two species. The leaf hair differences, visible with a hand lens, are well illustrated on the Manual of the Alien Plants of Belgium website. Once known the two species can usually be told at a glance with very high accuracy, but it always advisable to check the hairs. More recorders need to be looking for and distinguishing the two species if we are to have a representative picture of their true range in time for the next Atlas. 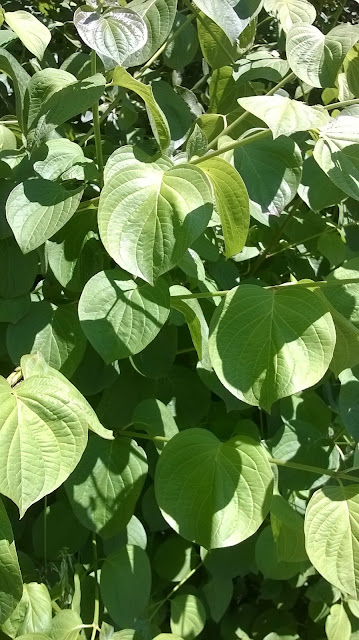 The typical large and rounded foliage of Southern Dogwood

The hybrid hawthorn Crataegus x subsphaerica is the subject of a separate post which can be found here. But I just wanted to show the current map of is distribution in VC63 and 64 following targeted searches this autumn. Note the two new locations well to the north of the Leeds cluster. It will be interesting to see how many new dots are added in 2017, I suspect it is going to prove very widespread and abundant.

What is interesting about my find at Moor Monkton (VC64) is that the original planted trees appear to have produced new trees much closer to Hawthorn (Crataegus monogyna) than the original stock. This suggests backcrossing, and this will add to identification difficulties in the future. Similar backcrossed bushes were found bird sown at Knostrop where there is a hedgerow dominated by the hybrid and estimated to be 30 years old. Clearly the hybrid has been with us for a while and has had plenty of time for birds to spread it around, so hybrids could potentially turn up anywhere. 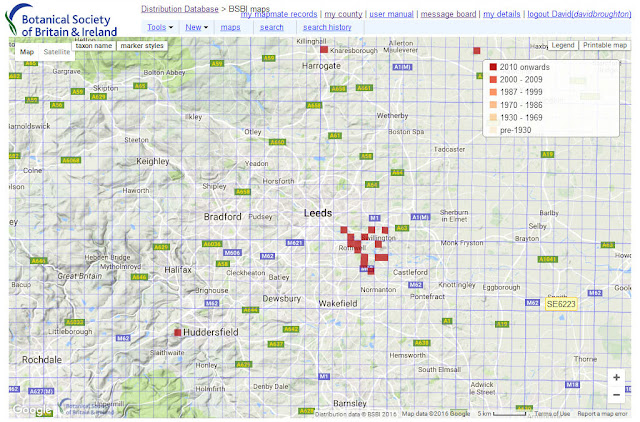 Posted by David Broughton at 20:18 No comments:

So the visits to sewage works have continued and, despite the lateness of the season, so have the nice finds. They really are fascinating sites and a lesson in the resilience of seeds. At one site there was a veritable fruit salad with the mandatory Fig (Ficus carica) and Tomato (Solanum lycopersicum) being joined by Cape Gooseberry (Physalis peruviana), Strawberry (Fragaria ananassa) and even a well established Grape Vine (Vitis vinifera). 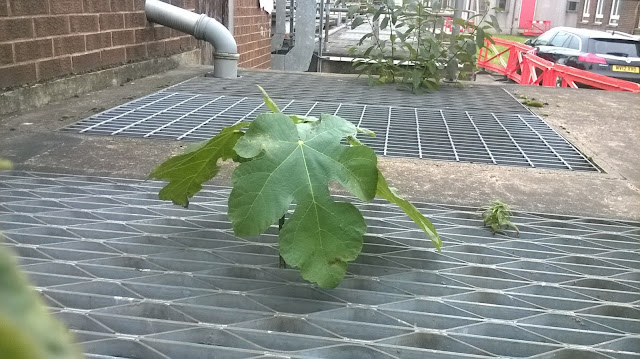 Life behind bars! - Fig tree making its way into the light(?) of autumnal Dewsbury (VC63) 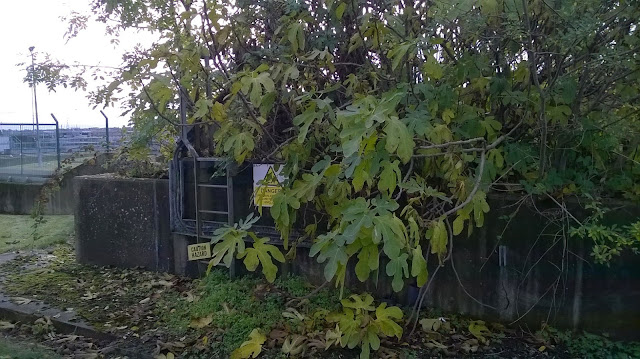 This one has really got its roots down, that's one happy Fig - Knostrop (VC64) 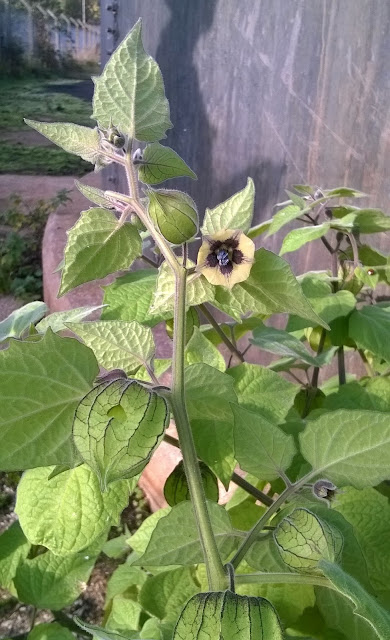 Cape Gooseberry at Harrogate (VC64) - where else, Tomatos are so last year

Or how about this as an oddity, no idea what this says about the diet of people in Dewsbury! 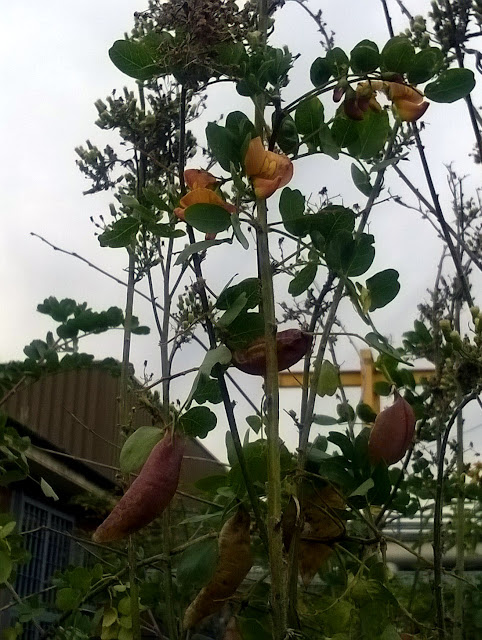 However, the best find for me of the last few weeks had to be the huge population (1000's) of Musk Stork's-bill (Erodium moschatum) at Knostrop (VC64). Nothing to do with the sewage treatment process, but it obviously liked the management regime at the site. 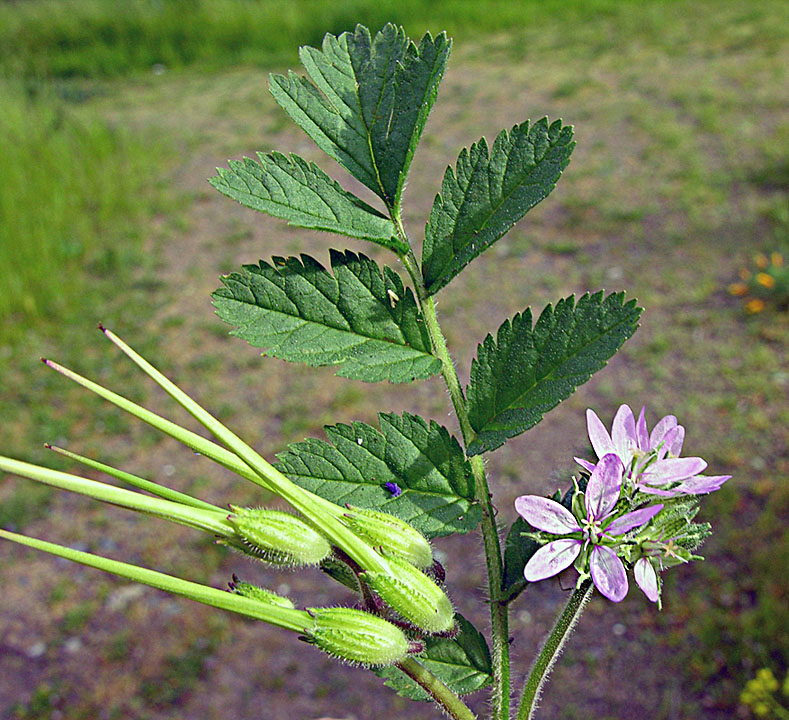