A couple of quick pics from this weekends stroll in search of Rosa x irregularis (found!).

I seemed to hit Townclose Hill (Billy Wood) just right this year for the Autumn Gentians (Gentianella amarella subsp. amarella). It was nice to catch them at peak bloom.

Back along The Lines I strayed into an adjacent arable field, I can't resist this habitat as there is always hope of finding a rarity. My luck was in and I was rewarded by a plant that was new to me, this being Niger (Guizotia abyssinica). 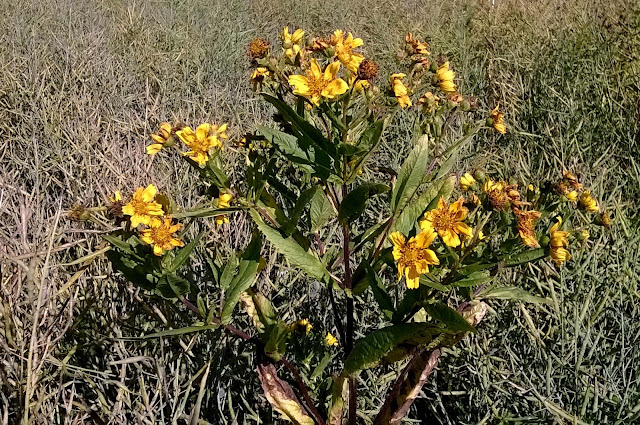 Coming back through Water Haigh Woodland Park in Woodlesford (VC63), I was also lucky to find a fine plant of Large-toothed Hawkweed (Hieracium prominentidens), which by the standards of the genus is a doddle to ID and one anyone should be able tackle with confidence. My photos were abysmal so check it out in Yorkshire Hawkweeds. If you don't own a copy yet, buy it while you can as it is written for those only just starting to dabble their toes into the wonderful world of Hawkweeds. A wonderful and well illustrated book.


Posted by David Broughton at 19:54 No comments:

I have been taking an interest in roses for a number of years now, a species group to be taken slowly and that rewards close observation, and have been gradually working my way toward trying to get to grips with some of the hybrids. Rosa x dumalis, in this case the cross between Dog-rose (Rosa canina) and Glaucous Northern Dog-rose (Rosa caesia ssp. vosaigaca), has been on my radar for a number of years, is very common and behaves like a species. In Huntingdonshire it is as common as Dog-rose, in VC64 it is also relatively common but as we are in Glaucous Northern Dog-rose territory it needs to be distinguished with care. But other than this one hybrid, I have only really dabbled.

Having come across an old paper where Chris Preston decribes his efforts to investigate and record the hybrids further, I thought it time I stretched myself a little and set myself the target of Dog-rose x Field-rose (Rosa arvensis) i.e. Rosa x irregularis. So I headed up the hill behind the village (part of VC63) where I knew I could expect both parents to see how I got on. Surprisingly well is the answer, and this does seem a good gateway hybrid to get you looking closer and appreciating the subtleties.

Graham and Primavesi in the BSBI Rose Handbook describe Dog-rose as very much the blank canvass species, against which you look for the differences that help to distinguish the other species and hybrids. That proved good advice for my current search as while the hybrid is reassuringly intermediate it might easily be overlooked if you don't know what individual characters preclude Dog-rose and which in combination suggest Field-rose.

The first thing I honed in with on my first likely candidate was the pedicels - were they glandular? (Note - this is not a character discrete to Field-rose). The answer was yes, and variably so but generally at a much lower level than would be the case for Field-rose. The next thing I noticed was the relatively length of the pedicels, very variable but with many much longer than would be expected in Dog-rose or indeed most other native rose species. The fruit, sepals, foliage and stems also looked intermediate with characters of Field-rose but beefed up by the Dog-rose genes. On some bushes there was variability of fruit set with a high proportion abortive. Similarly some bushes had biserrate leaves which again is a Dog-rose character. Another useful character is the intermediate prickles which are often aggregated. I hope the following photographs help illustrate some of these traits. My next challenge is to start to record it in VC64 and 31 as I'm sure it will be common wherever the two species meet. 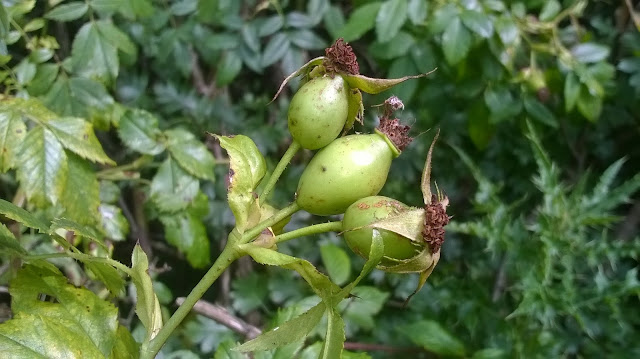 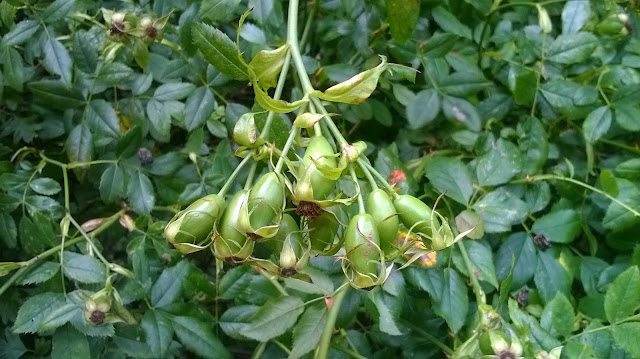 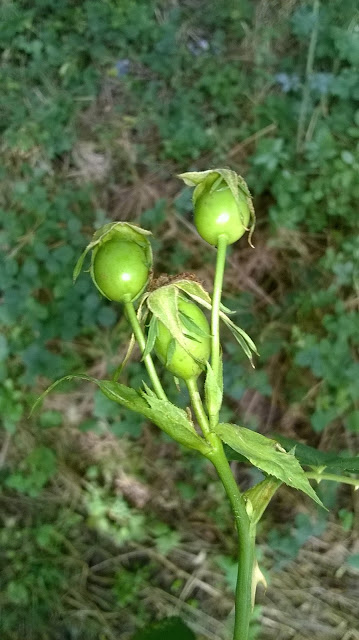 Note the variation in pedicel length with some to 3cm, while the outer fruit are proportioned more like Field-rose and the inner like Dog-rose 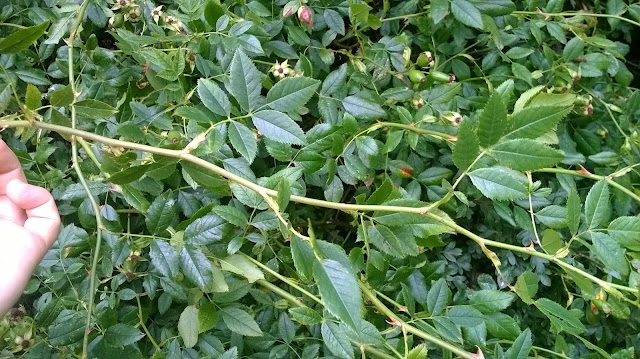 Intermediate stems and foliage, on a sprawling and suckering thicket 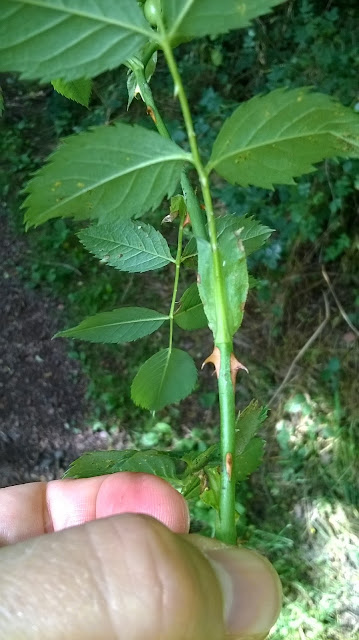 Towards the middle of the stem, 3 prickles can just be made out in close association (aggregated)

Posted by David Broughton at 19:19 No comments:

I finally made it, after 7 years of not really trying, up Ilkley Moor this week in the heat of Tuesday and probably unwisely without 'at. This is of course a well botanised site so I was not expecting to add much new to the plant list, and in this light I did quite well.

The first good find was a new stand of the non-native Silver Lady's-mantle (Alchemilla conjuncta), extending its range into a new tetrad. 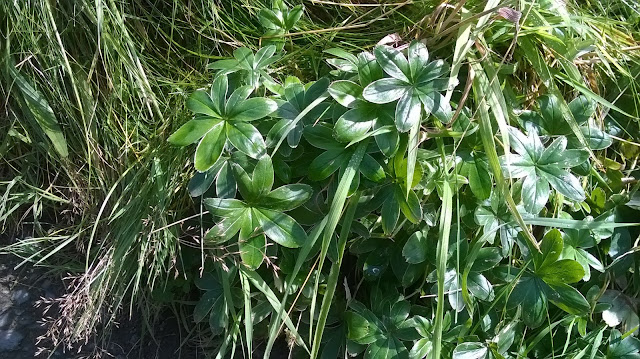 Not a new location, but of interest to me was the enigma that is Cut-leaved Bramble (Rubus laciniatus). No one really knows this species origins, or whether it is native or endemic to Britain. It is certainly not native in Yorkshire, but in comparison with the thug that is Himalayan Giant (Rubus armeniacus), I am more than happy to welcome it. 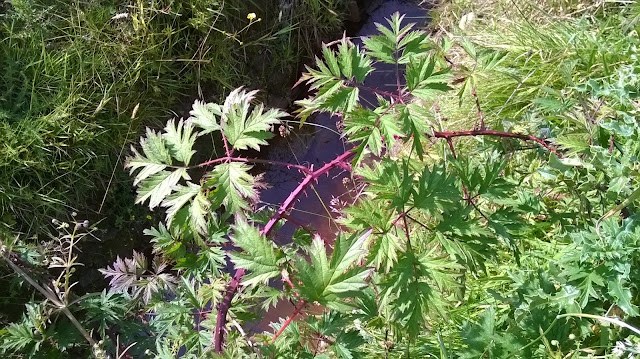 By far the best find of the day, apologies in advance for the over-exposed photo I blame the low late season sun!, was a colony of Knotted Pearlwort (Sagina nodosa) along the the historic alignment of Keighley Road. From the data available to me, it does not appear to have been reported from the Moor for decades, so I am pleased to have refound it. The associated Eyebright (Euphrasia) is giving me headaches and is one for the BSBI referee. 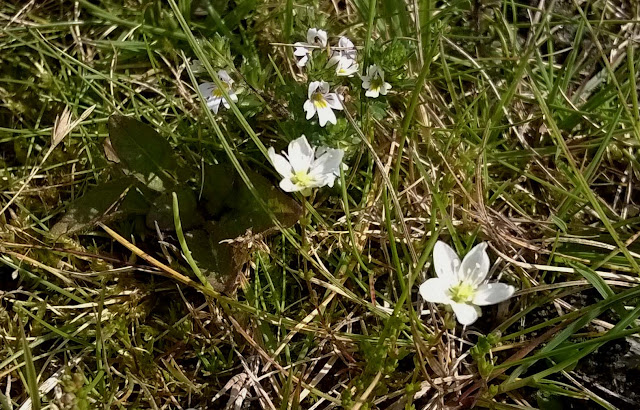 To end with, here is the view from Addingham High Moor where the carpets of Heather (Calluna vulgaris) were at peak bloom. Scenic as it is, it is important not to forget what an impoverished habitat this is for native flora. Over a century of over-management for grouse does not leave room for much else, and it is not a very satisfying habitat for a botanist. That said, Ilkley Moor seems to be suffering the opposite effect i.e. a legacy of under-management resulting in an ever increasing dominance of Bracken (Pteridium aquilinum). There must be a middle ground somewhere, but it is a challenge to find the most favourable balance in the modern world where traditional agriculture and land management is no longer economic. 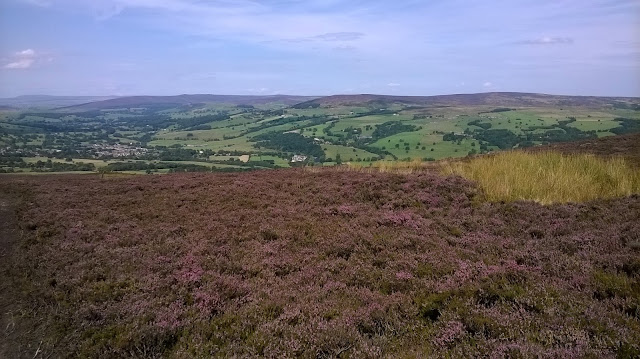 Posted by David Broughton at 19:31 No comments:

I took advantage of the favourable weather forecast on Thursday and headed out to Settle. I'm not sure why I had not made it there sooner given it couldn't be easier by train, but my trips to the Dales have been all too infrequent as I focus efforts elsewhere for the New Atlas. Halfway round my planned circuit to Giggleswick Scar and back, I came to the little hamlet of Stackhouse and thought it worth a brief detour. Its fair to say the "spidey senses" were tingling and I've learnt not to ignore those! The gut-feeling didn't disappoint particularly when I found a little track that went round the back of the village between some high, old limestone walls.

First up was a fine stand of Hairy Bindweed (Calystegia pulchra), a bit of a thug but a very fine thug. I last saw this species 10 years or so ago in Wales, so a re-encounter was long overdue. This is a rare plant in the county and the historic records have a very low level of detail associated with them, so it was good to find a new location and record it accurately. 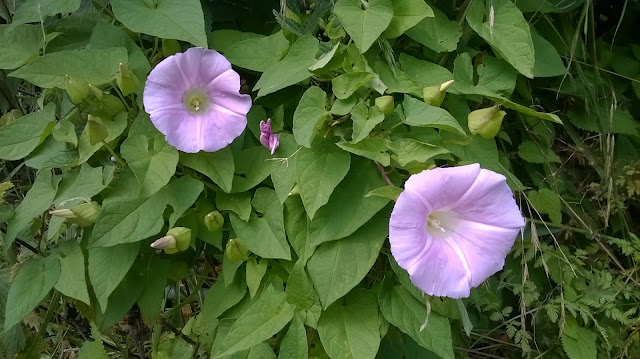 Next up was an even scarcer species and a new one for me - Lamb's-tail (Chiastophyllum oppositifolium). Just a shame I had missed it in bloom, as this huge colony must be an impressive sight when covered in yellow flowers. Previously this species has only been reported from Bowland, so this is a marked range extension. 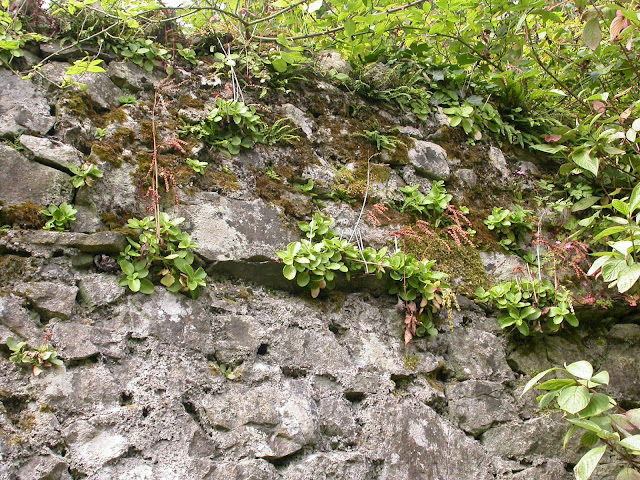 Here's what I had missed earlier in the season ... 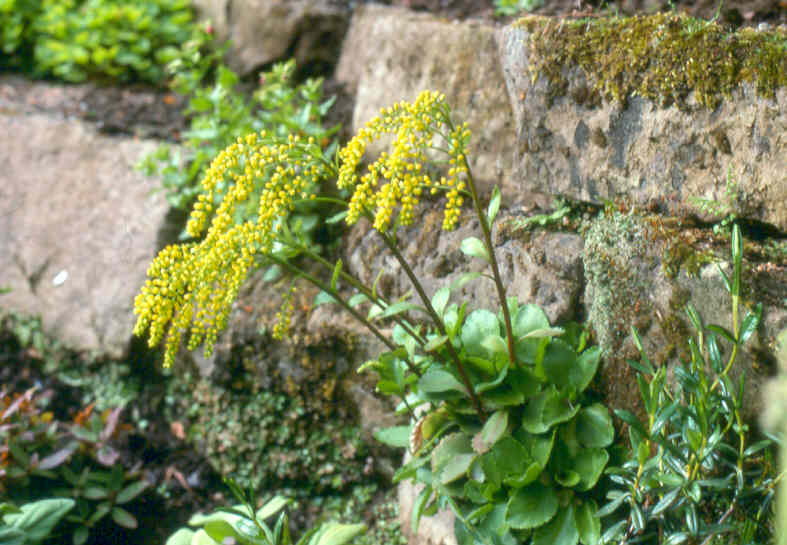 My luck was still in when, just round the corner, were two large plants of Elecampane (Inula helenium). This is another rare plant and predominantly found in the east of the county. 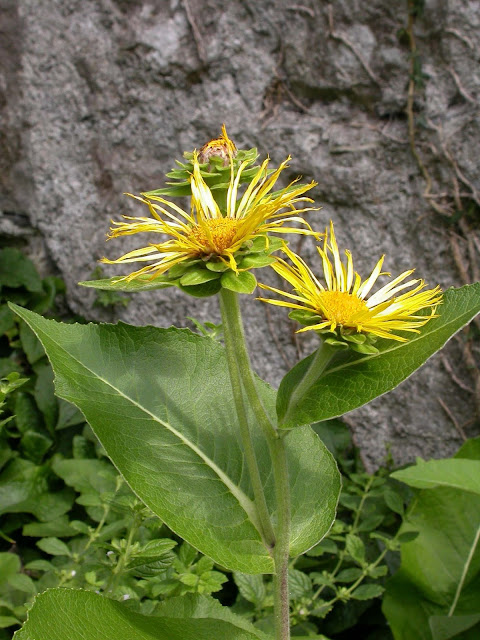 Elsewhere, I almost discounted the Yellow-flowered Strawberry (Potentilla indica) for the Wild Strawberry (Fragaria vesca) which is common on the scars above Stackhouse. Luckily there was a single flower and then I clocked the distinctive fruit. This is only the second record for the VC, and the first record lacks a detailed grid reference. 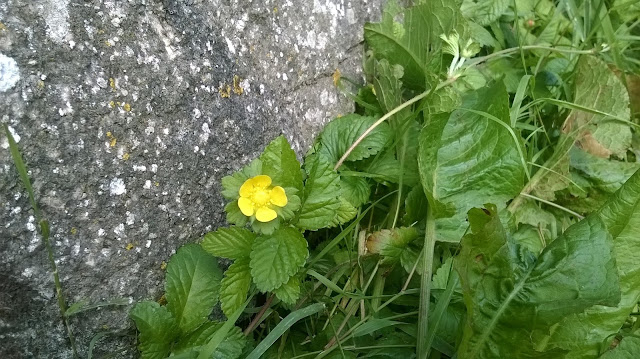 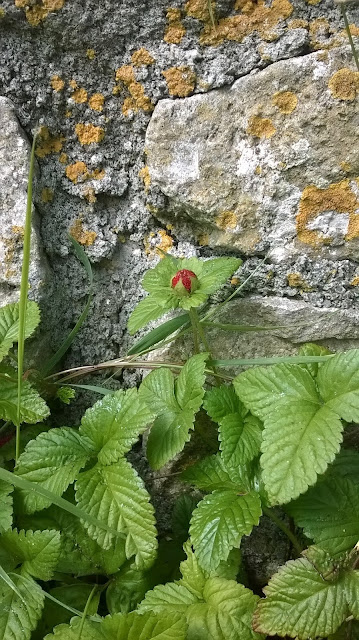 Final mention must be made of the uncommon white-flowered form of Ivy-leaved Toadflax (Cymbalaria muralis subsp. muralis) that was adorning some of the walls.This goes by the cultivar name of 'Pallidior'.

Photo by Paul Ruddoch from the Nature Spot website

Posted by David Broughton at 17:39 No comments:

Jonathan Shanklin, a regular contributor of records for VC31 and co-recorder for VC29, has spent some time around Aldborough and Lower Dunsforth recently and the county database is several hundred records the better for it. He made some interesting finds along the way, as follows:

Flowering-rush (Butomus umbellatus), uncommon along the River Ure and no recent records (photo by Christian Fischer from Wikimedia Commons)

Upright Spurge (Euphorbia stricta), a rare casual in this part of Britain (photo by Hermann Schachner from Wikimedia Commons) 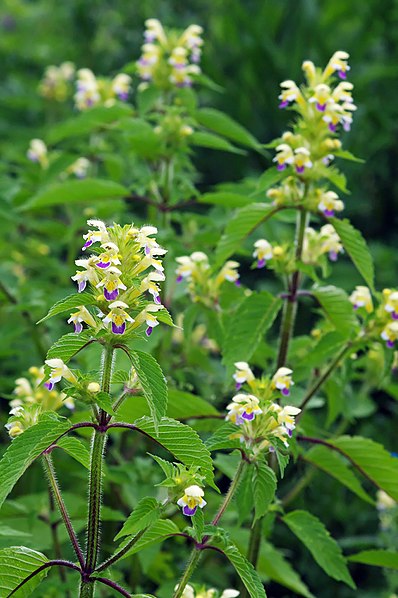 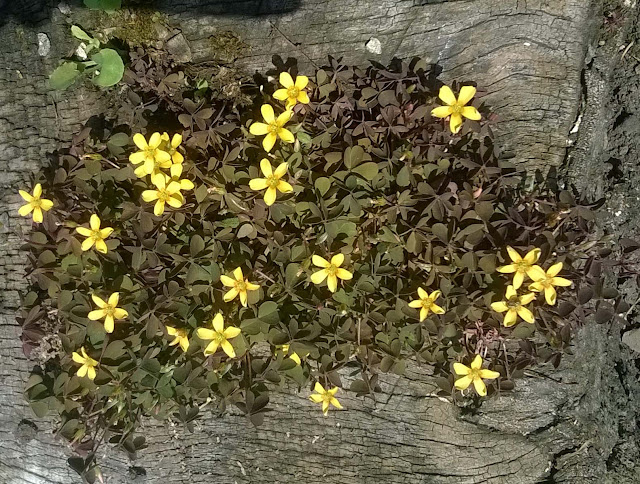 Procumbent Yellow-sorrel (Oxalis corniculata var. atropurpurea), a much under-recorded colour form of this non-native. I suspect it is much more common than the green-leaved form and seems to be an historic horticultural selection (although it would not be considered of garden merit these days) (photo my own, taken in Oulton, VC63)
Posted by David Broughton at 13:35 No comments:

One of my regular local walks takes me past Oulton Hall ponds and its thriving population of the North American water-lily Spatterdock (Nuphar advena). So I thought it about time I shared some photos. Its related to our native Yellow Water-lily (Nuphar lutea) but some of the leaves are held above the water's surface and are more pointed. 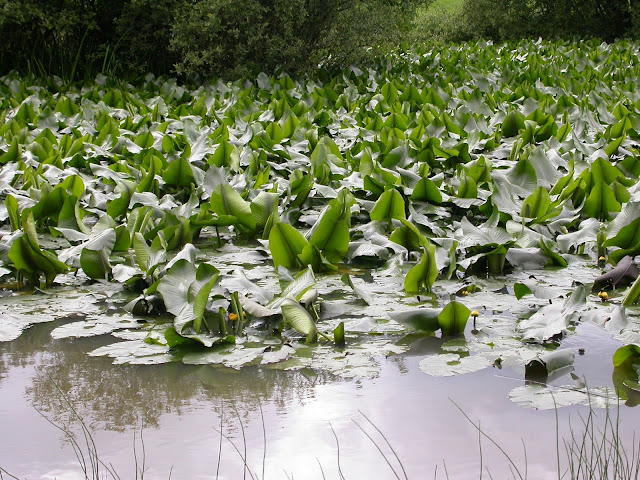 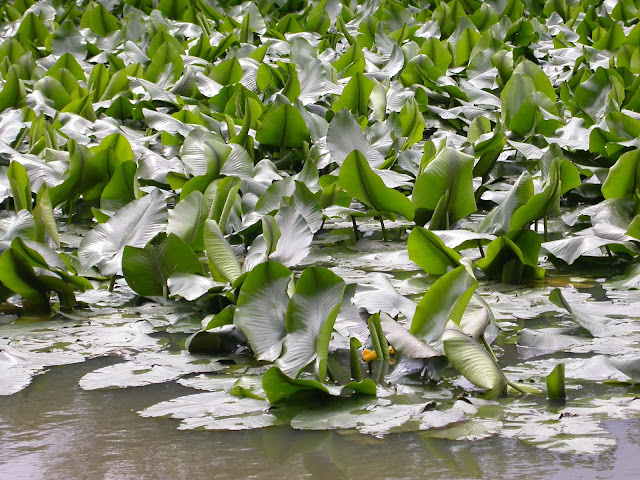