Some recent detective work by Mike Canaway has paid off. He has followed up and re-found a relatively old, and poorly located, record of Purple Saxifrage (Saxifraga oppositifolia) for Moughton Fell (VC64). Mike was initially sceptical of the record 'because the area of the supposed record seemed too low in altitude and mainly grassland, whereas the classic Dales sites are high up on cliffs' but that did not deter him going for a look. The proof is in the photos below. 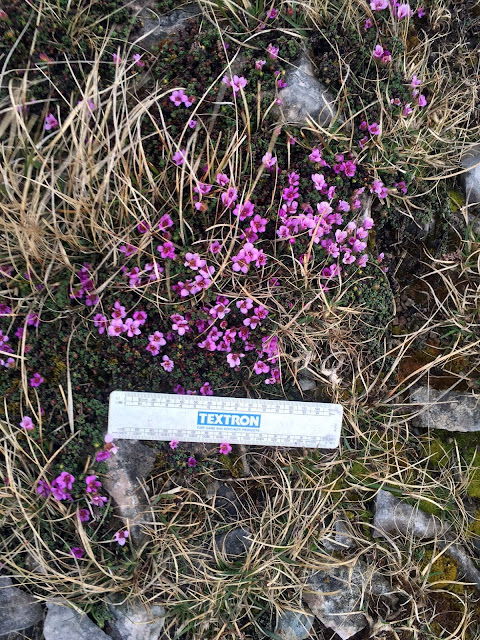 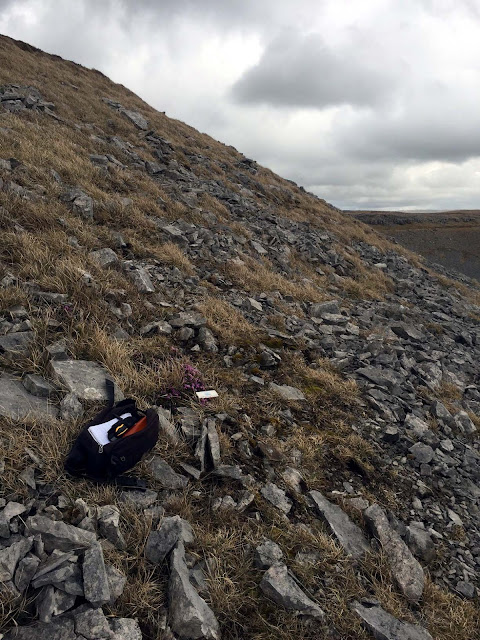 Posted by David Broughton at 16:16 No comments:

Lynne Farrell sends news of a new site for Snake's-head Fritillary (Fritillaria meleagris) at Arthur's Meadow Nature Reserve (VC31). Lynne went with Roger and Sarah Orbell, to see if there were any Green-winged Orchid (Anacamptis morio) in flower. It was not a great success for the orchid, but Roger came across a white-flowered individual of the fritillary.

Snake's-head Fritillary had not been recorded from the nature reserve previously, with the main site in the county being at Portholme SSSI (where Lynne counted 704 plants today). The origin of the plant is unknown but Lynne speculates, in lack of another explanation, that she may have been an inadvertent vector for a seed. Lynne has been involved with monitoring the Portholme population for a number of years and is the warden for Arthur's Meadow.

Photo by Brian Robert Marshall from Wikimedia Commons website
Posted by David Broughton at 20:13 No comments:

A glorious sunny day last week took me across to Temple Newsam (VC64), mainly for the walk but also to see if I could spot anything not noticed previously - including any late spring daffodils.

The first good find of the day was a few plants of Spotted Medick (Medicago arabica). A new hectad record for the BSBI Atlas 2020 project. The low spring sunshine prevented me taking a decent photograph, as it did with the normally photogenic Marsh-marigold (Caltha palustris). The latter, while still widespread, is now much diminished as a result of the drainage of its wet habitats, so it was good to find a new site.

The planted Juneberry (Amelanchier lamarckii) near the golf course was looking great, with its coppery new foliage and pristine white blossom. 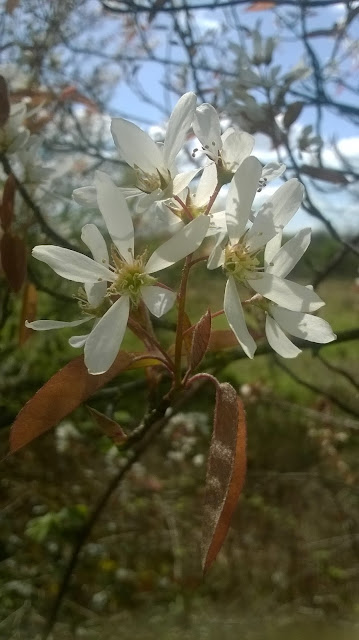 By the Menagerie Ponds, a few distant pearls of white on the opposite bank caught my eye. Further investigation revealed a naturalised colony of Summer Snowflake (Leucojum aestivum subsp. aestivum). These were probably introduced when the Estate was in its heyday, but now they are in an unmanaged area sandwiched between open water and dense stands of Rhododendron cultivars. 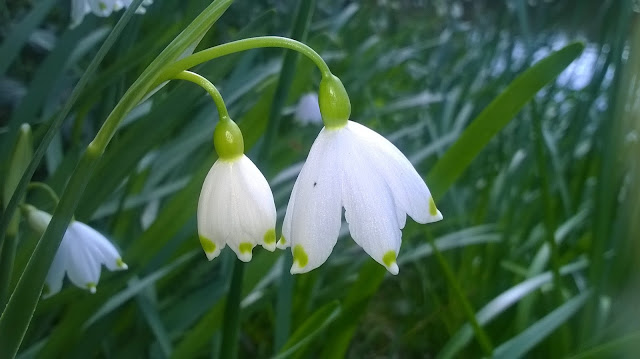 Another relict from the old Estate was found in the unmanaged woodland along The Old Walk. Here were some fine old bushes of a shrub that gave me pause for thought, as it was clearly a Skimmia but not the species favoured today i.e. Japanese Skimmia (Skimmia japonica). Further research led me to Hybrid Skimmia (Skimmia x confusa). The blossom was very fragrant and attracting plenty of bees. While this species is clearly of planted origin, its setting meant that it was a legitimate target for recording in accordance with BSBI Recording Guidance. 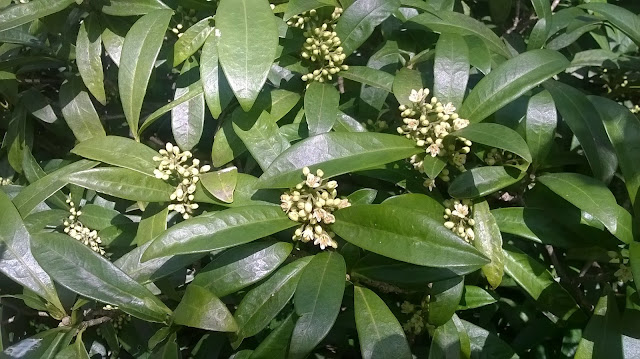 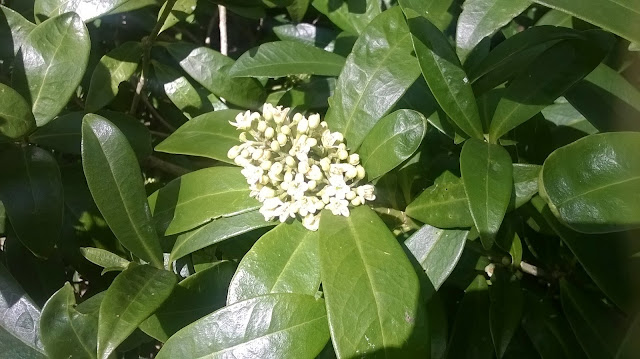 Elsewhere I found two naturalised colonies of Siberian Squill (Scilla sibirica) in areas of rough grassland with a range of native flora. This species does not appear to have been recorded here previously, so this was another useful record for the Atlas. 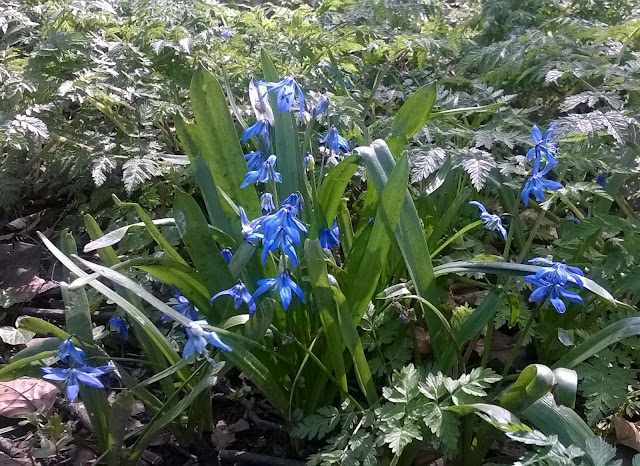 So on to the daffodils! There was a fine stand of Pheasant's-eye Daffodil (Narcissus poeticus) in an area of woodland (photo below) and among it a few plants of its hybrid - Primrose-peerless (Narcissus x medioluteus). The latter was present as the old fashioned plant, and not one of the modern cultivars that are widely planted on road verges (such as 'Geranium', which I passed on route to Temple Newsam at Swillington Bridge, and its double-flowered sister 'Cheerfulness'). 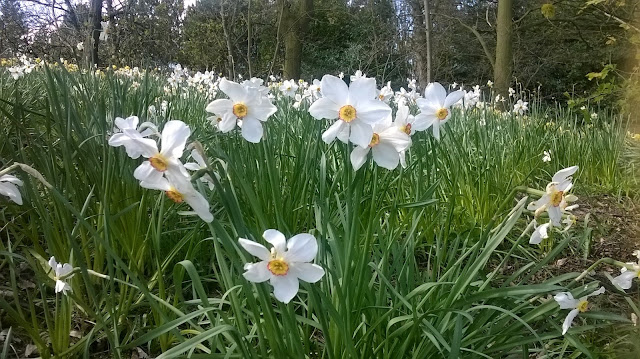 On the woodland edge I was surprised to find a clump of Cyclamen-flowered Daffodil (Narcissus cyclamineus), this may have been planted more recently but as it was clearly going over there may have been other plants in the wood that I missed. 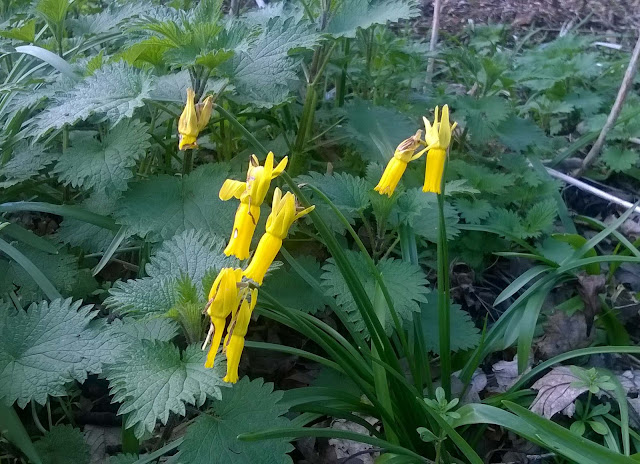 To round off the day there was one more daffodil on the way home, where I found a fine naturalised stand of the multi-headed (or at least normally multi-headed, it can be single-headed) Campernelle Daffodil (Narcissus x odorus - Narcissus jonquilla x pseudonarcissus agg.) on a rural road verge at Leventhorpe. 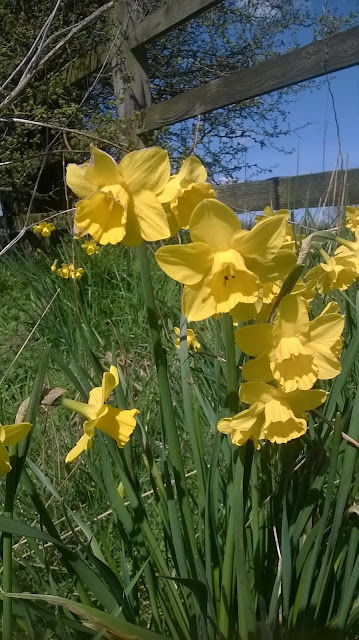 Posted by David Broughton at 17:38 No comments:

The daffodils really are racing ahead this year, and I will be lucky if there are any left in VC31 when I get down for my annual daffodil hunt. Proving this point I found a fine stand of Pheasant's-eye Daffodil (Narcissus poeticus) in full bloom along Fleet Lane, Methley (VC63) today. This was subsp. poeticus which is distinguished by the corona which is a flat disc. To avoid confusion, the photo is of a 'severed head' displayed against some foliage in my garden. 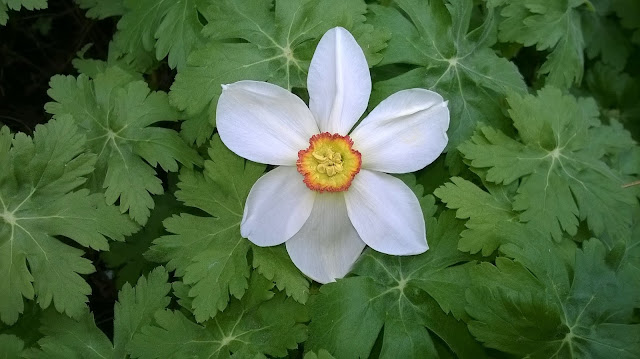 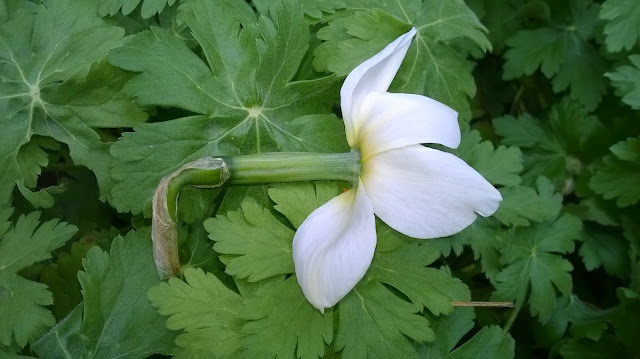 While this species is straightforward once known, the keys make reference to the stamens occurring in two whorls. This is only really evident when you split the perianth, and even then they are only slightly separated. This trait can just be made out in the following photo. Note the anthers have been removed from the lower whorl for clarity. 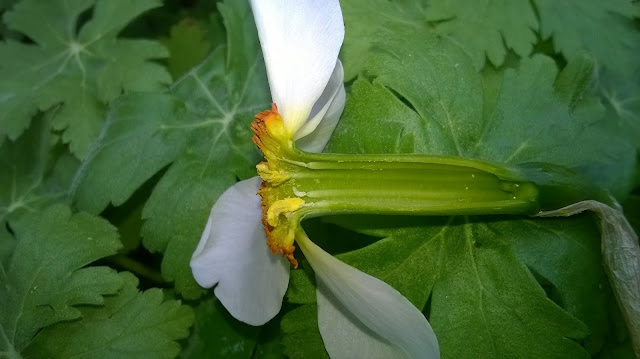 The two tone corona of Pheasant's-eye is also sometimes evident in its hybrids. While past its best, an example is this modern Nonesuch Daffodil (N. x incomparabilis) cultivar found under a hedgerow by the Aire & Calder Navigation. 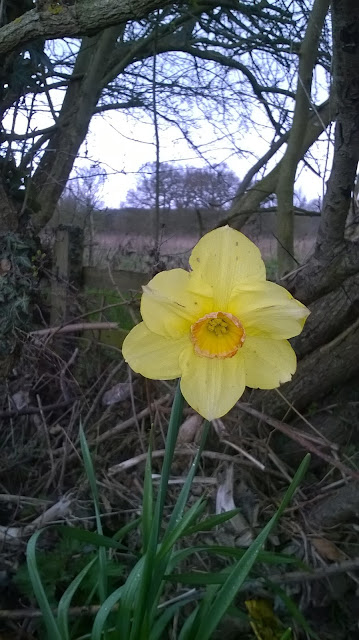 Posted by David Broughton at 20:32 No comments:

Email ThisBlogThis!Share to TwitterShare to FacebookShare to Pinterest
Labels: Narcissus

A few more of the common hybrids illustrated below, again from Oulton churchyard (VC63).

The Head-to-head Daffodil Narcissus x cyclazetta 'Tete-a-Tete' (Narcissus tazetta x cyclamineus) is arguably the world's most popular daffodil, arising in the 1940's and with c. 70 million tons of bulbs produced annually. What's not to like, a blast of sunshine in the bleakest months, sturdy and reliable. The only difficulty for the botanist is that some books imply that it reliably has two flower heads per stem. Unfortunately 'Tete-a-Tete' has not read the books, it can produce two but it rarely bothers, particularly after its first year of planting. 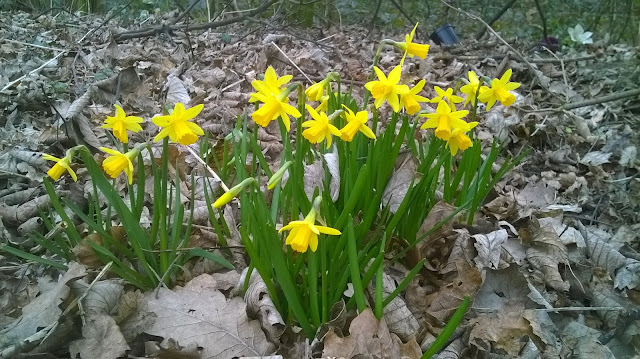 Next up is Reflexed Daffodil (Narcissus x monochromus), but I have no idea if the very common form photographed is the cultivar 'Jetfire' or 'Itzim', as both are very similar, or even if it should strictly be included under this hybrid. Strictly the corona should be yellow (monochromus being a big clue here) to reflect the N. pseudonarcissus bloodline, while the reflexed (but not always from day one of opening) perianth segments come from Narcissus cyclamineus. I include it here for convenience, and it gives a fair indication of what to expect (without the orange, its otherwise very similar to 'February Gold' the classic cultivar of this hybrid). Just be clear on the corona colour if recording this hybrid, as that way if the correct name get resolved then the records can be easily reassigned later. It definitely has N. cyclamineus as one parent, place your bets for the other(s). 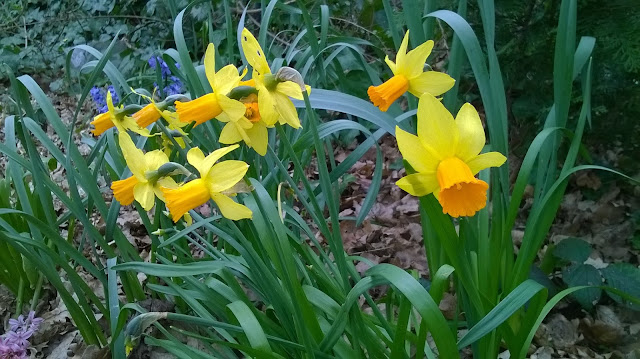 The white and yellow version of the above is known as Bicoloured Daffodil (Narcissus x dichromus) and is reputedly Narcissus moschatus x cyclamineus. The cultivar here is 'Jenny', who can confuse as the corona starts pale yellow (which you need to know to key it out) and then ends up as cream. 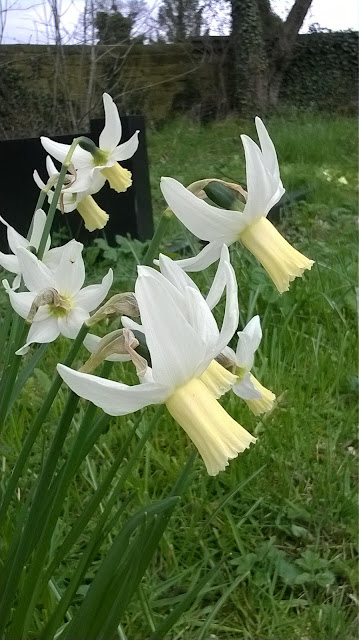 
Posted by David Broughton at 19:55 No comments:

It is a good season for looking at Daffodils (Narcissus agg.) as they all, with the exception of the late flowering Pheasant's-eye (Narcissus poeticus) seem to be flowering in synchrony, allowing good opportunity to compare and contrast. I'm going to put my hands up and say Narcissus nomenclature (whichever system you pick - taxa versus cultivar) requires more than its fair share of faith in the robustness of the available classification and information, particularly with regard to plants naturalised in Britain. The keys encourage plants to be aligned with taxa that in many cases only have passing similarity to their wild relatives (at best robust selections or cultivars and at worst multi-parent hybrids), or hybrids that may or may not relate to the putative parents and that may in all likelihood share genes with a fair few other taxa. What else can one expect from a group of species that are so inter fertile and that have been subject to intensive selection and hybridisation for at least 100 years. That said its all good fun, it does add to your appreciation of the diversity out there, and names linking plants of similar appearance are better than no names at all. The key caveat in all identifications is 'looks like' or 'close to'.

My current favourite bulb hunting ground - Oulton churchyard - has thrown up the goods this year, including some forms I have not seen in previous seasons. This includes some nice stands of some of the older selections of the Pheasant's-eye hybrids, note the short corona and the long perianth tube. I much prefer these delicate older cultivars, with more recent breeding moving towards more robust flowers through back-crosses away N. poeticus and towards the other parent. Perhaps more on those later, but for the time being here are a few from today. 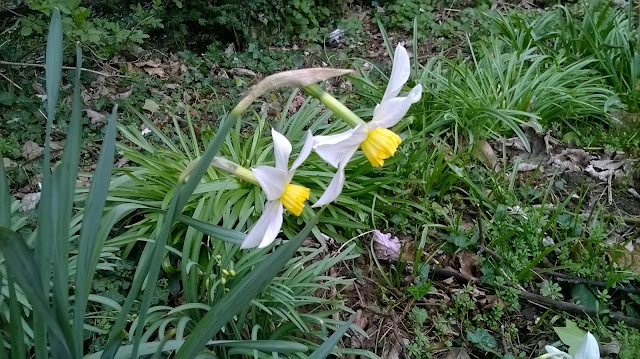 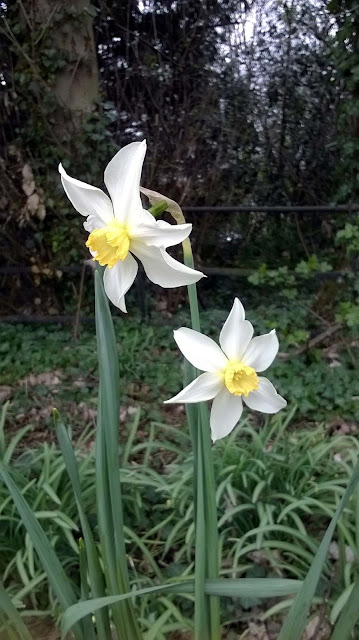 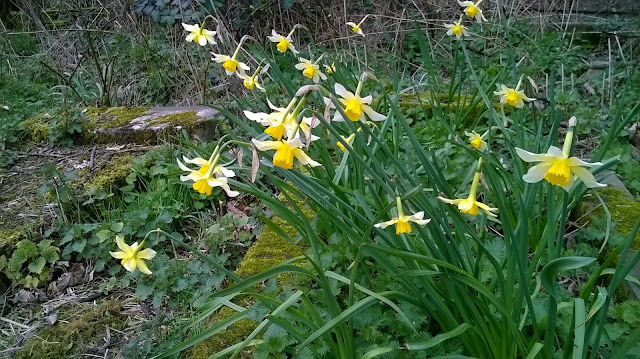 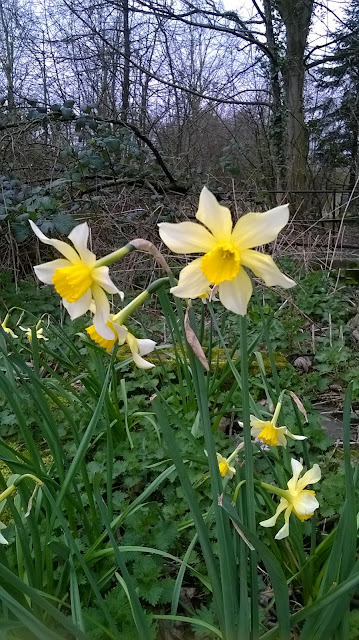 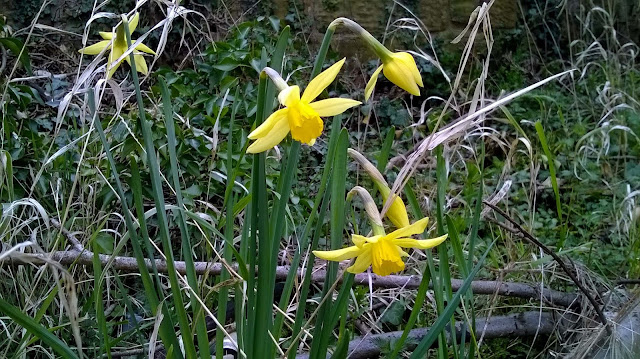 Bernard's Daffodil (Narcissus x bernardii, could be an extreme Nonesuch but the closest I have seen to this hybrid) - +/- concolorous perianth whorl and corona (Narcissus hispanicus x poeticus) 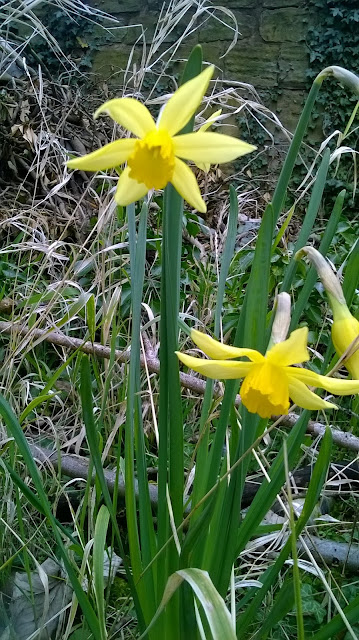 To end with, one of the more blousy modern hybrids, but an extremely common one. This is Narcissus x boutigyanus 'Ice Follies'. Note the more intermediate perianth tube, the larger corona and broader perianth segements. Ice Follies is also notable because the corona gradually changes from lemony yellow (first photo) to cream (second photo) as the flower ages. 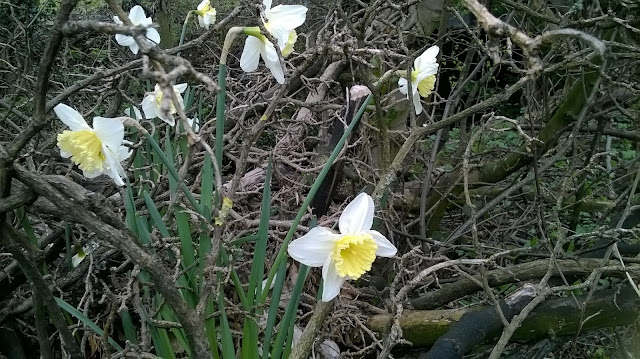 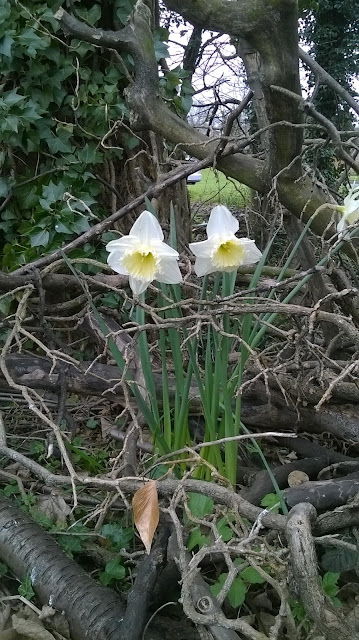 Posted by David Broughton at 17:29 No comments: