My best find of this weekend was strictly speaking a Saturday Surprise, but the iPhone was rubbish at taking pictures so I had to go back again today. I found a nice stand of Bithynian Vetch (Vicia bithynica) in flower at the edge of St Aidan's not far from Caroline Bridge. Unfortunately it was in VC63, but you can't have everything! This is the first time I have seen this species in this area since 2012, and then I only got to see it in fruit. I am surprised that it flowers so early, its almost over for the year. 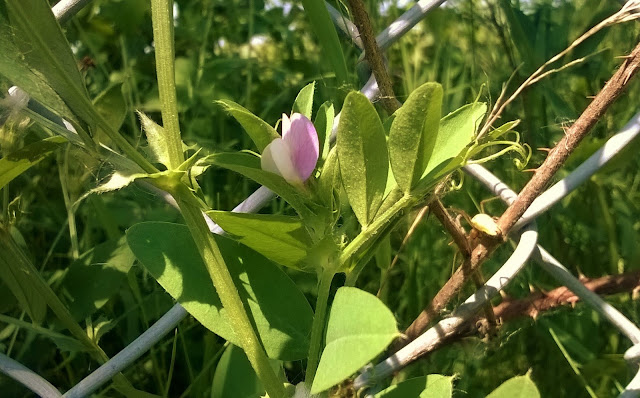 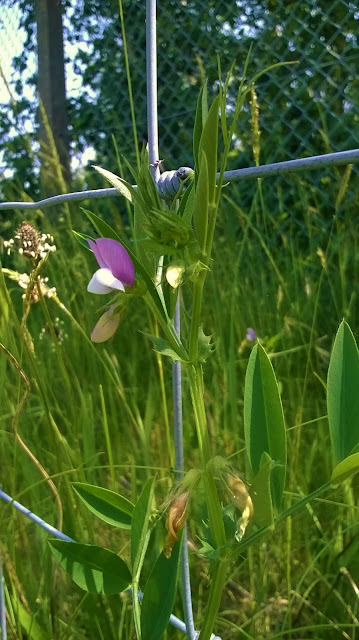 Just as interesting really, and definitely found today, was Wall Bedstraw (Galium parisiense) elsewhere in St Aidan's (VC63). I had hoped this would turn up eventually as conditions look great for it. It is a species that seems to be on the increase with records elsewhere in West Yorkshire in recent years, as well as a stronghold in the Scunthorpe area. No photo though, as yet to flower.

Down by the river near Lowther Lake (VC64) I came across a large and distinctive hogweed with hairy petioles. This is the hybrid between the native plant (Heracleum sphondylium) and Giant Hogweed (Heracleum mantegazzianum sens. lat.). Satisfyingly intermediate. As can be seen, I struggled to get the leaf in frame due to its size (that and restricted scope for movement given care was needed not to tangle with any of the surrounding Giant Hogweed). 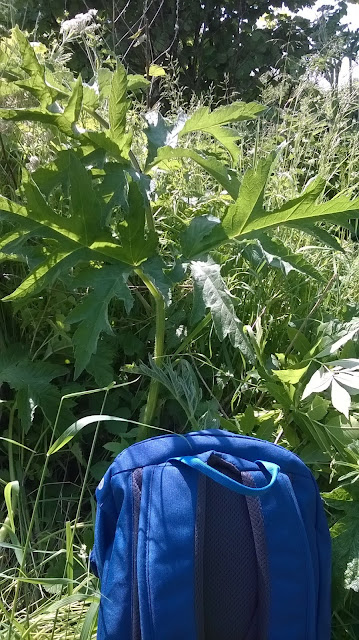 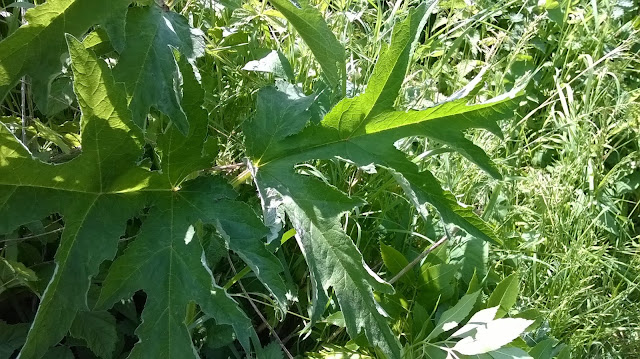 Heading on to The Lines in Great Preston (VC64), I found a large sprawl of Himalayan Clematis (Clematis montana).  I was surprised later to discover that this was the first VC record. 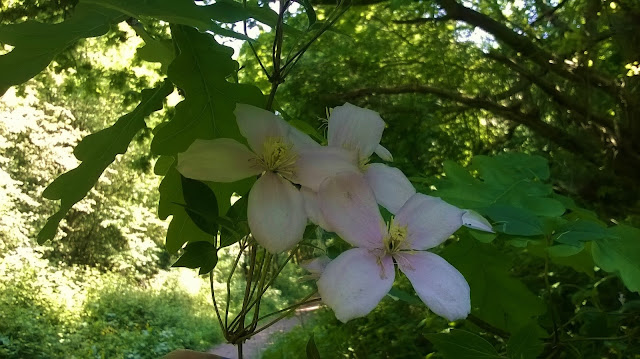 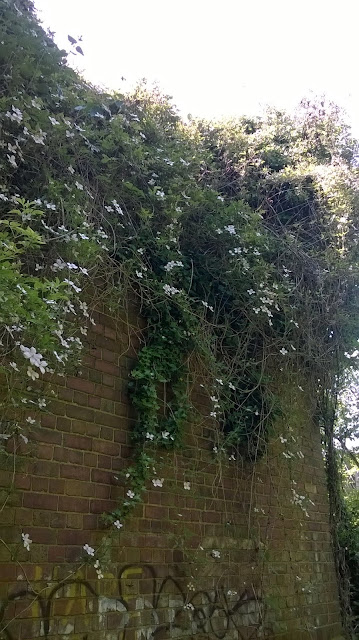 Elsewhere in the village the pavement cracks were full of the diminutive variety of Fringed Pearlwort (Sagina filicaulis var. minor). This is proving widespread, and extending the season for this species in my eyes. As stated in a previous post, this is a species I more typically expect in summer when it is apparent as a more robust form.

Ending what proved a productive walk was a bush of Large-sepalled Hawthorn (Crataegus rhipidophylla) near Fleakingley Bridge (VC64) that I had not noticed previously. Not as common as its hybrid, but still widespread in the local area. An odd flower (out of 10's checked) had 2 stigmas rather than just one, but apparently this is not unknown for this species so I had to rapidly discount any thoughts this might be the hybrid with Midland Hawthorn (Crataegus laevigata). 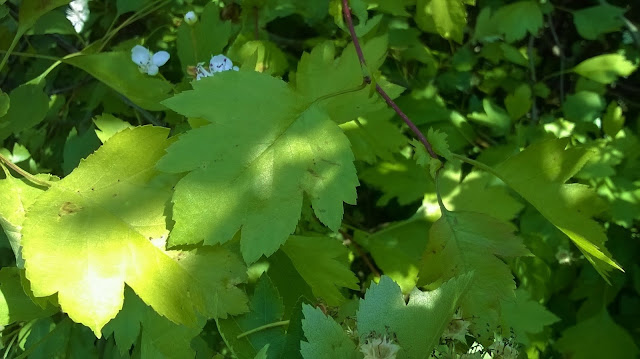 Posted by David Broughton at 20:55 No comments:

The Little Things in Life

I had a pleasant surprise this week finding a plant that has long alluded me, and boy is it tiny. I have worried for a while that I was missing Annual Pearlwort (Sagina apetala), and even more so since it was split from Slender Pearlwort (Sagina filicaulis). The latter I know well from pavement cracks in summer when it generally occurs in abundance and it quite obvious. Looking at the New Atlas I was surprised at how widespread Annual Pearlwort was meant to be given I was not finding it.

So it was a great pleasure this week to be down at Brotherton Ings (VC64) and to find a tiny pearlwort in a sparse community of winter annuals on a pocket of otherwise unvegetated substrate derived from deposits of pulverised fuel ash (the Ferrybridge Powerstation is just across the river). So  popped a few in a bag to look at under the microscope. Back at home a quick look met my hopes and it keyed out quite nicely to Annual Pearlwort. Even better it was growing with equally diminutive Slender Pearlwort so I could see the differences in sepal arrangement (erect versus patent), and the ciliate leaves of the latter. The latter species was very different (smaller in all parts, more branched,  more compact, and ascending not erect stems) from the typical urban plant and seems to be var. minor, I shall have to look for it further in this kind of niche and at least a month before I would ordinarily be looking for and recording the species.

Having a feel for the niche now, I thought I would see it I could find it at my Little Mouse-ear (Cerastium semidecandrum) site down by the railway to the north of Rothwell Country Park (VC63). It took a little searching but low and behold there it was and even tinier than the previous population. There would be no spotting this without being down on your knees consciously looking.

Some photos below of plants from the Rothwell colony, the first with equally diminutive Little Mouse-ear and Silvery Hair-grass (Aira caryophyllea). I think this is var. patula, the equivalent of filicaulis var. minor. 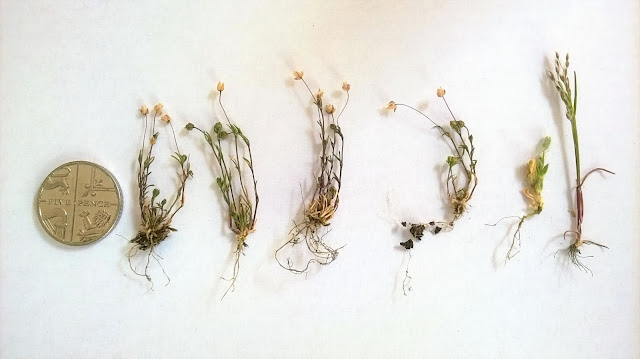 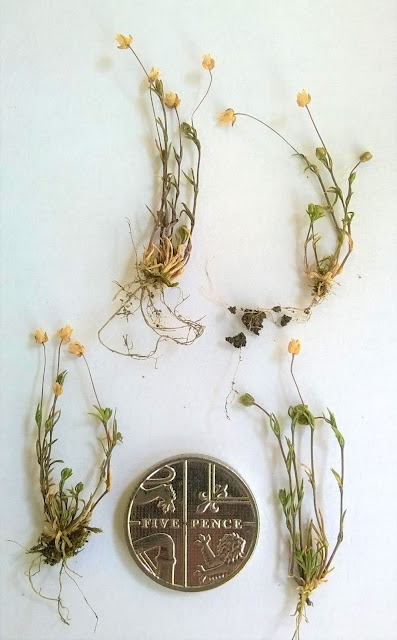 Posted by David Broughton at 20:21 No comments:

May is such a beautiful month that it seems criminal to waste a sunny day and not get out to enjoy the vibrancy of spring. So with no specific plans in mind I decided to take one of my usual routes round the village to St Aidan's and back.

There was nothing ground-breaking but it is great to see the grasslands and lake margins at St Aidan's coming into peak growth. Another two to three weeks and it will be a carpet of flowers.

However, it was good to find some of the nominate variety of Crack Willow (Salix x fragilis nothovar. fragilis). Its a great time to be looking for the varieties as trees are in catkin and the leaves are mature enough to avoid potential confusion with White Willow (Salix alba). Nothovar. fragilis seems very under-recorded, no doubt in part because when it is not in catkin it is the most nondescript of the nothovars, making it hard to have confidence in the ID. In the case of the local trees they are male, so can only be this nothovar. The only other similar male form (nothovar. furcata) has forked catkins. 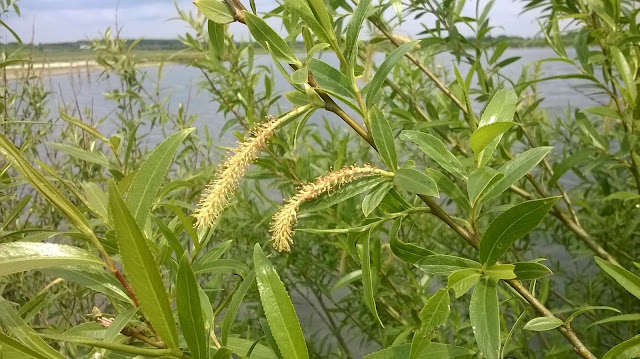 The margins of the lakes and meadows have been sown with a variety of supposedly native species, but prevailing as non-native fodder forms. In peak bloom at the moment is Fodder Salad-burnet (Poterium sanguisorba subsp. balearica). A relatively tall form, with large flower heads longer than wide. I found it a challenge to get a decent photo, being left with just a couple out of 20 plus attempts. 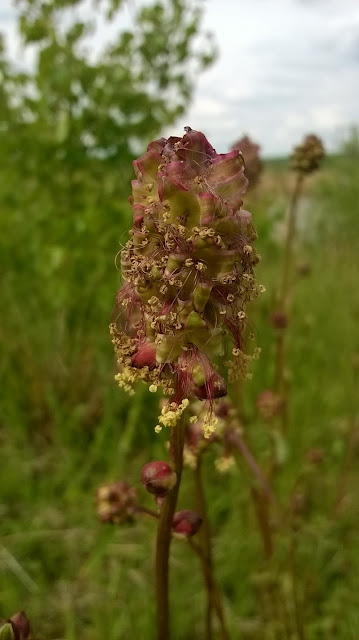 The bicolour flowers of Common Vetch (Vicia sativa subsp. segetalis) were also much in evidence. 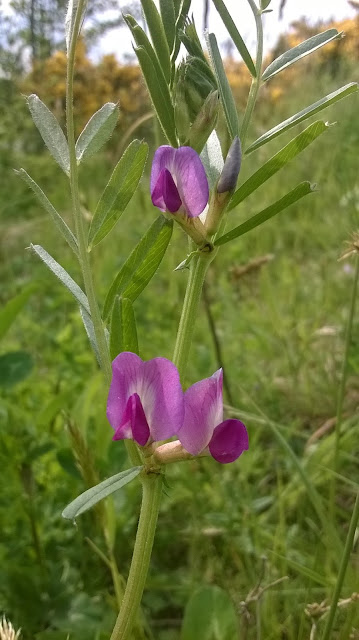 Elsewhere the two mature trees of a robust cultivar of Bird Cherry (Prunus padus 'Watereri') - relicts from a former colliery planting - were flowering well. I find it hard to believe this is not of hybrid origin. I am not the first to think this but I can find no evidence that this has ever been tested.  It was once a popular plant for landscaping schemes, but in recent years the wild type has become the prevailing form planted. Not surprising given that the latter is a much more charming tree in comparison with this rather ungainly cultivar. Note the large leaves and long racemes (pencil in the photo is 15cm long). 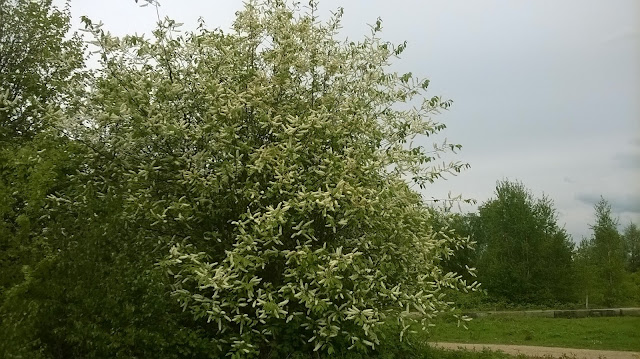 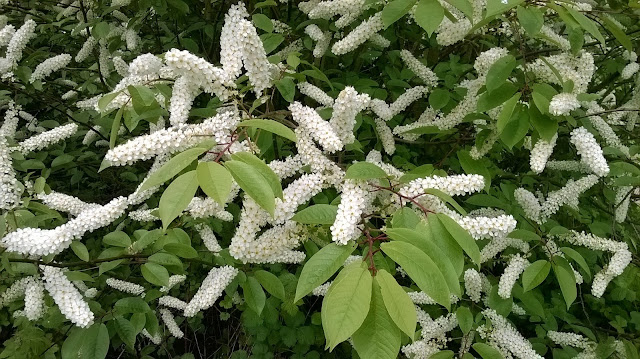 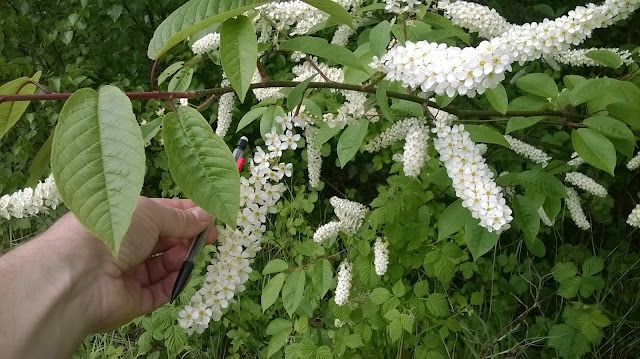 A surprising plant this far down the Aire valley and out in the open on a ditch bank was a large clump of Greater Wood-rush (Luzula sylvatica). As this site is important flood storage in winter, I can only assume that it arrived with flood water. 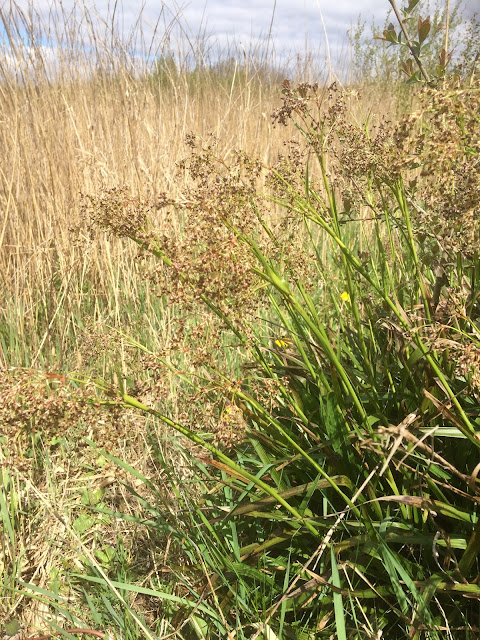 On the way back home a garden throw-out by the marina gave me a new patch record, and the first hectad record in the DDB since before 1993. Round-leaved Mint (aka Pineapple Mint) was found under trees in its variegated form (Mentha suaveolens 'Variegata').

Posted by David Broughton at 12:06 No comments:

Its always nice when work takes me to one of my VCs. It doesn't happen very often but when it does I usually find something interesting. This time it was a trip to St Neots Rural Parish, an obscure corner of VC31 which until recently (following expansion of neighbouring St Neots) was virtually unpopulated. VC31 has a couple of these strange parishes, with Stanground North being even more obscure and unoccupied.

The first of the good finds was an obscure variety of Crack Willow (Salix x fragilis nothovar. furcata) that can only be reliably identified in flower (but the foliage is relatively distinct - large, wide and very glossy - and does give a clue of where to go back and look in the following spring). As the photo shows it is a male with forked catkins. This is the first record for the VC for at least 40 years. 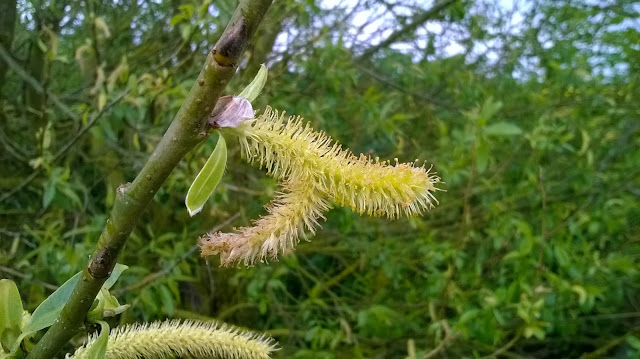 Even better was the next find in a nearby field corner, where a 100 plants of Shepherd's-needle (Scandix pecten-veneris) were waiting to be found. Some were already in flower while others had only recently germinated. This species has become very rare in recent years, both in the VC and nationally, so it was great to find it in such good numbers and with spent stems from the previous year to show it had been here at least the year before as well. 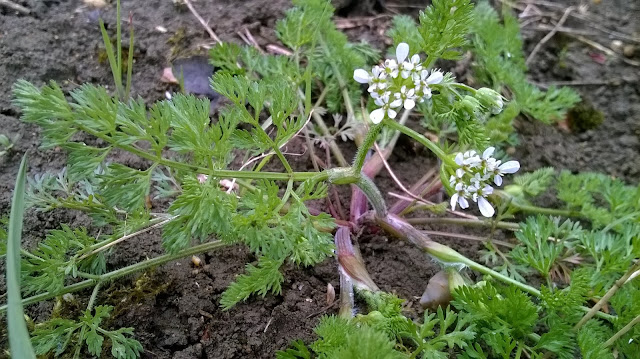 Posted by David Broughton at 20:00 No comments: