There is nothing better for the February doldrums than a day off work, sunshine and snowdrops. My local snowdrop hotspot is Oulton churchyard (VC63) and rather unexpectedly the edge of the Toby Carvery car park - I suspect the latter was once part of the grounds of a large house or old estate. 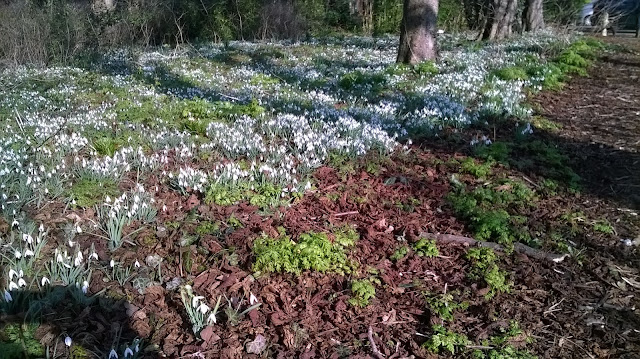 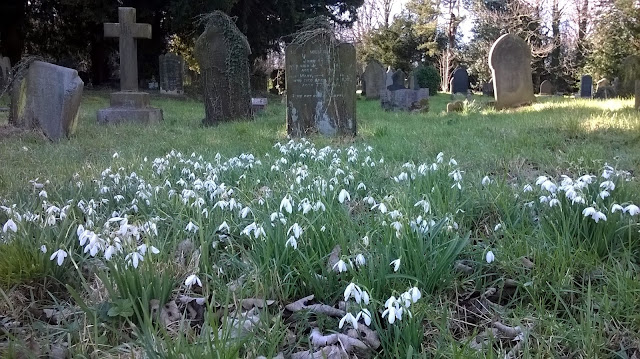 The churchyard supports extensive stands of long naturalised snowdrops.Five taxa were putting on a good show today, but it really needed a little more warmth from the sun to get the flowers opening up a little more. Based on my experience gradually getting to grips with the genus, the most important thing is to temporarily ignore the flowers and your pre-expectations (they are not all Common Snowdrop (Galanthus nivalis)). What colour are the leaves (bright shiny green or glaucous)?, how wide are the leaves (same or less than the width of your little finger, or are some wider)?, and what is going on at the base of the leaves where they meet (this is the really important bit with the horrid terminology) - is the vernation supervolute (leaves overlap, see photo), applanate (leaves abut, like hands held in prayer) or explicative (leaf margin distinctly folded over towards the leaf undersurface)? Once all that is sussed, the flowers can be admired and scrutinised! 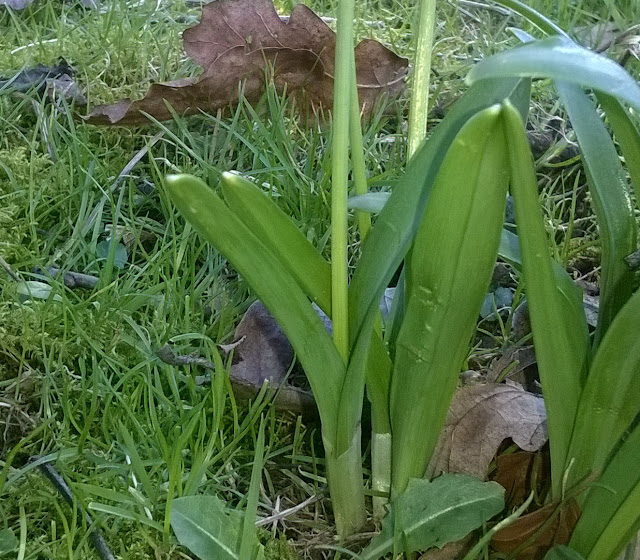 Supervolute vernation of the leaf bases, note the overlap

Common Snowdrop is abundant in the churchyard, and is present in two forms. Plants with single-flowers are f. nivalis and plants with double-flowers are f. pleniflorus (below). The cultivar of the latter is normally 'Flore Pleno' but there are other rare double forms best left to the Galanthophiles. 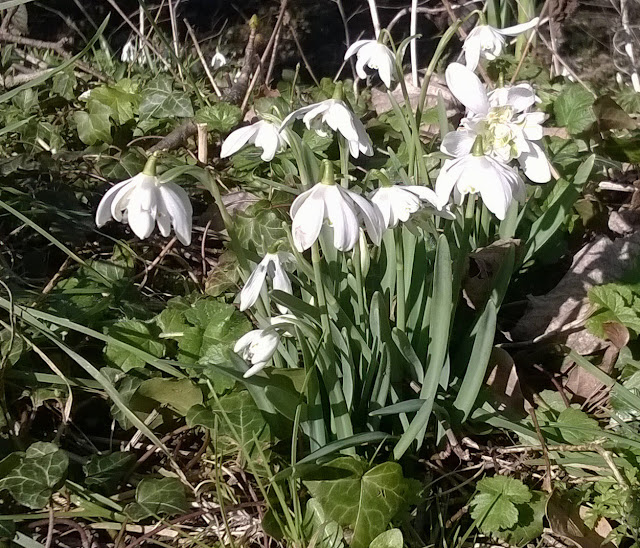 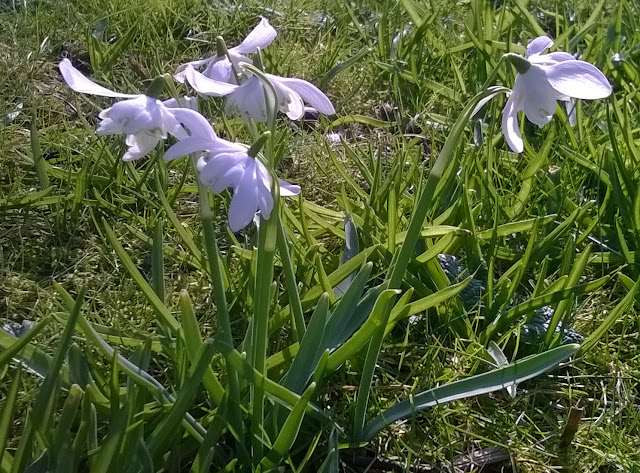 Equally abundant, and in fact a very common and frequently misidentified or overlooked snowdrop, is Galanthus x valentinei, a hybrid of Common Snowdrop and Pleated Snowdrop (Galanthus plicatus). It is common in churchyards, in some cases it may have arisen in situ but in most cases this is probably a naive assumption, as it is just as likely to have been planted in the past as the parents. This species typically has a good dose of hybrid vigour, and gets bigger still after flowering has peaked. Any particularly robust snowdrop is likely to be this species. It frequently (but not always) has the applanate vernation of Common Snowdrop, but the wider leaves (greater than your little finger) of Pleated Snowdrop. The photo below is of nothosubsp. valentinei, which only has a short apical mark on the inner tepals (as per Common Snowdrop). There are lots of cultivars and probably as many unnamed forms and self-sown segregates, so again in many cases it is best left to the Galanthophile to debate these. But in this instance I feel safe in saying almost all the plants in the churchyard are 'Magnet' or very close to it, given the shape of the apical mark and the nodding flowers on long pedicels. 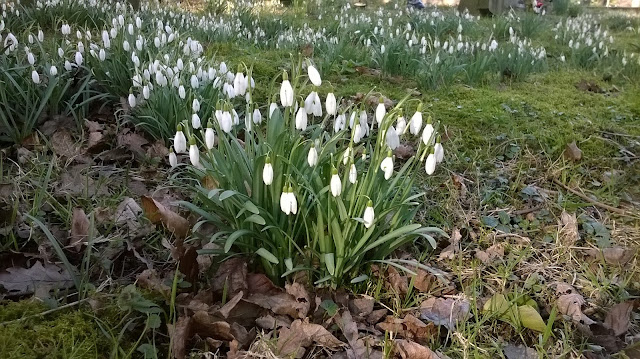 The final two species are much rarer in the churchyard. Greater Snowdrop (Galanthus elwesii) has supervolute venation (as can be seen in the photo) and variably glaucous/glaucescent leaves. In this case the inner tepals only have a short apical green mark denoting it as var. monostictus. 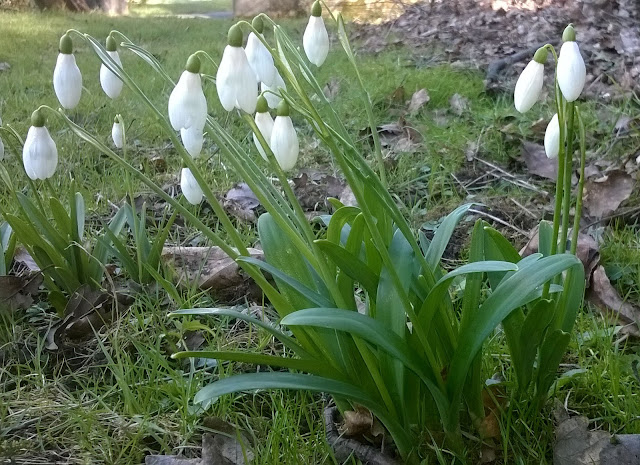 Galanthus elwesii, note the leaves are glaucescent and some of the colour has been lost in the photo

In contrast to all of the above, Green Snowdrop (Galanthus woronowii) is unusual in that it has bright shiny light to mid-green leaves. It also has supervolute vernation. The form here was particularly robust (much better than my garden plant) with atypically large flowers (but within the published range of variation). 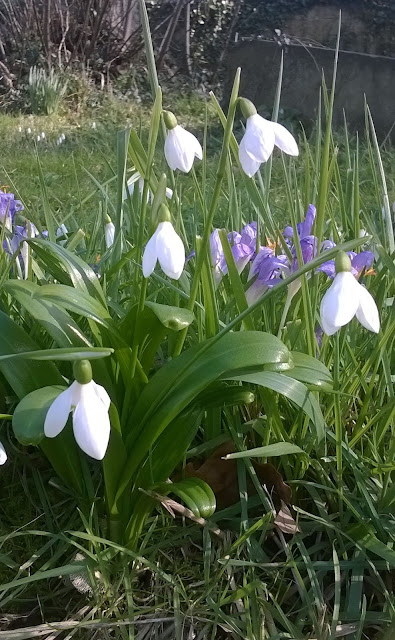 Posted by David Broughton at 19:39