Finally the rain has gone and today was too good a day not to get out somewhere and enjoy the late summer sunshine. My walk took me past Royds Green (VC63) where the bindweeds were in peak bloom and one large stand stood out from the rest due to its intermediate flower size and the wide variation in bracteole morphology, making me instantly think Hybrid Hedge Bindweed (Calystegia x lucana).

The variable bracteoles is often the best way to spot plants that may be of hybrid origin and this is illustrated in the following photo of three flowers taken from the same plant/clone. Note that the flower on the left has ridiculously smally bracteoles, the middle flower has markedly asymmetric bracteoles, while the flower on the right has very large bracteoles that make no attempt to wrap around the flower. The photo also shows variation in corolla length. The flowers are larger than the native parent, Hedge Bindweed (Calystegia sepium ssp. sepium), but smaller than the other parent Large Bindweed (Calystegia silvatica). 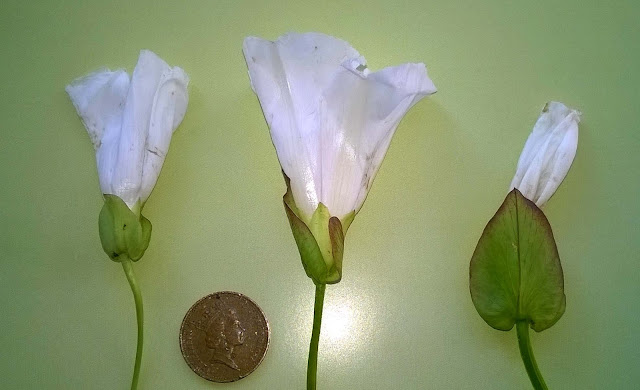 Stamen and stigma size are also intermediate between the two parents. The following photo has the stigma of the hybrid on the left and one from Large Bindweed on the right. 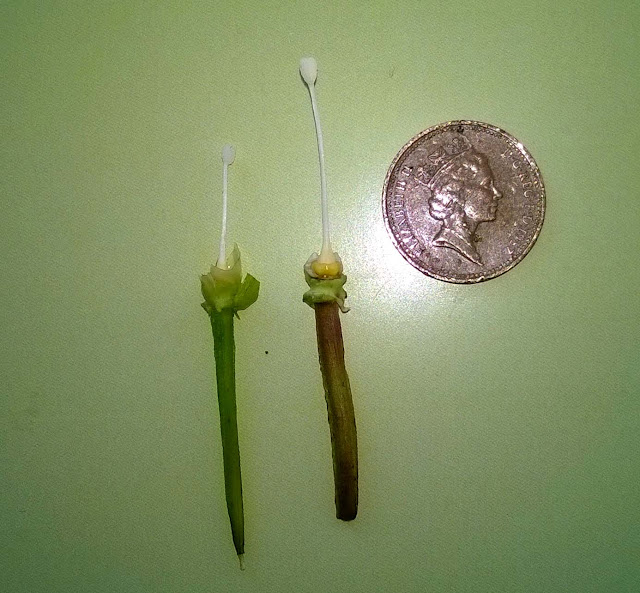 Now is a great time to look for the hybrid. There are lots of historic records for VC31, made by Terry Wells in the 1970's, but it has not been reported recently. The BSBI database doesn't seem to hold any records for VC64, so there's something that needs to be resolved!

Posted by David Broughton at 18:58

Email ThisBlogThis!Share to TwitterShare to FacebookShare to Pinterest
Labels: Calystegia