Bottom Boat and Back

I made the most of the good weather on Tuesday to walkover over to Bottom Boat (VC63). Its not a route I do often, as it requires a bit of a slog up and over the ridge that separates the Aire Valley from the Calder Valley, but it does offer potential for interesting casuals and escapes and usually provides something of interest.
The day started well before I had even left Oulton with some particularly robust Cockspur (Echinochloa crusgalli) on an arable margin. This seems to have sprung from nowhere given I walk pass this field regularly. 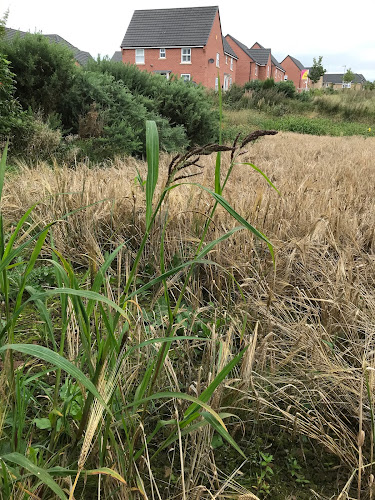 Reaching my target destination I stumbled on a patch of derelict hardstanding with a variety of interesting garden throwouts. This is where I met 'Angelina' (see previous post). Other highlights included:
The golden form of Wilson's Honeysuckle (Lonicera nitida 'Baggesen's Gold'). 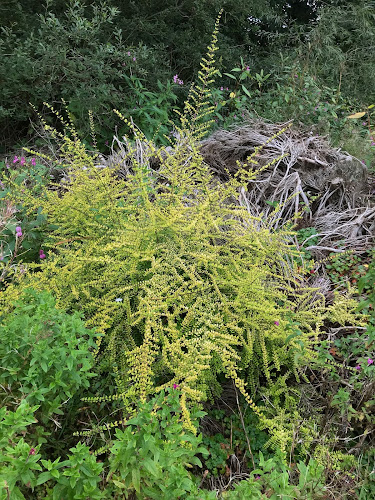 Pink-sorrel (Oxalis articulata), in association with Stinking Hellebore (Helleborus foetidus) and surprisingly, as I did not know that it can throw up leaves in autumn, Garden Grape-hyacinth (Muscari armeniacum). 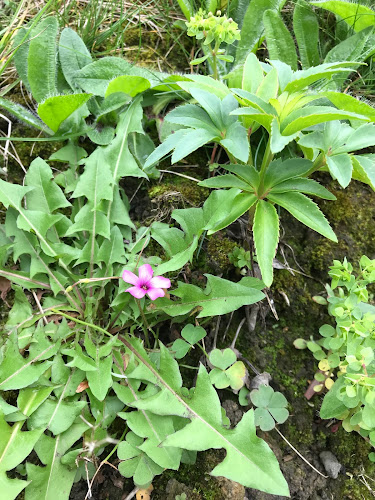 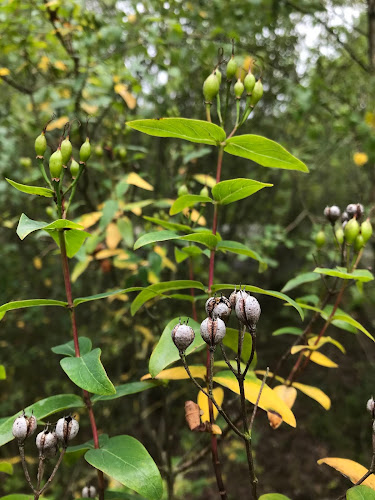 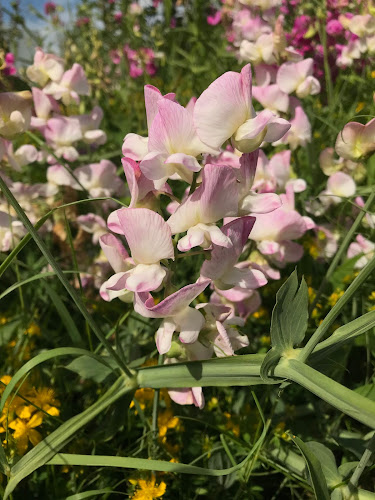 While an arable margin nearby had the winged form of Black-bindweed (Fallopia convolvulus var. subalatus). Supposedly less common than the nominate form, but that is not my experience. 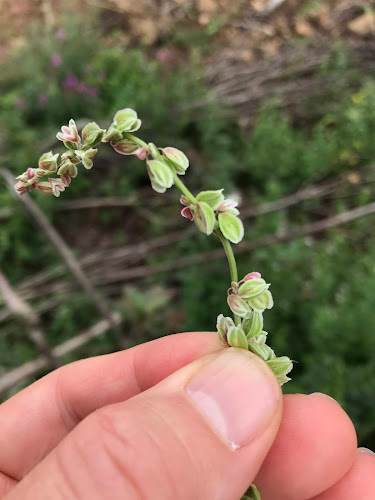 Working my way down towards the River Calder I moved into abandoned former colliery land. Not the richest of habitats, it needs a few more decades yet, but still with interest and its great that no one has tried to 'restore' it.
By the farm track on route was a young and apparently self-established tree of Cherry Crab (Malus x robusta), a variable group that perhaps includes plants of other origin. One of the characteristics of this species is that the individual apples are variable in terms of whether or not they retain their sepals. I think it likely that the fruit will colour further, they were in shade so a little behind. 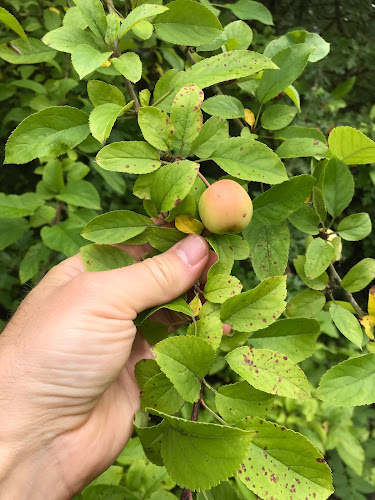 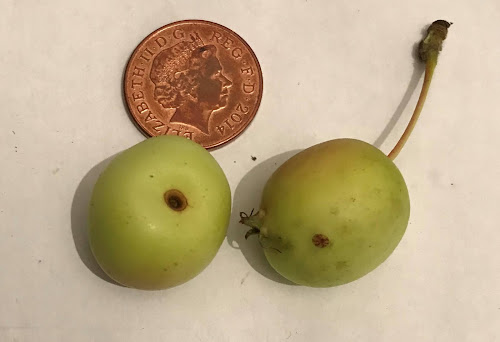 Heather (Calluna vulgaris) is already starting to move in amongst the secondary birch woodland, a species that is very uncommon in the lowlands of Leeds and Wakefield. 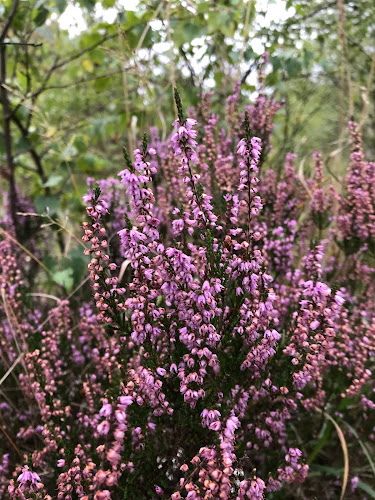 But keeping with the theme of unusual non-natives there is also a thicket of sapling Broad-leaved Cockspurthorn (Crataegus persimilis 'Prunifolia'). No idea how that arrived, but it does not look planted. It proved the first of several interesting (at least to me) hawthorns. 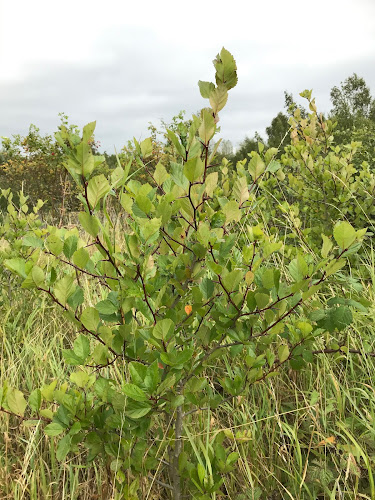 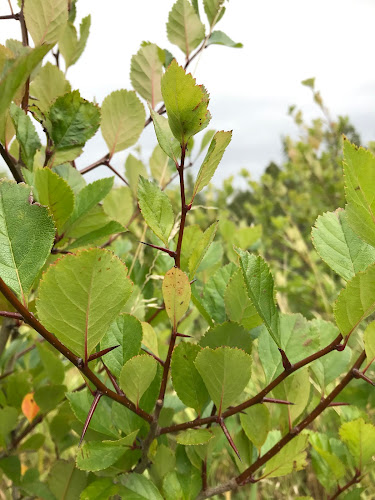 Further on, the landscape architects had been in at some point in the last 30 years 'restoring' the landscape and creating 'native woodland'. Of course its nothing of the sort, rank MG1 grassland and the usual mix of false natives and lookalikes. Among these was a tree currently going by the name of Miyabe's Maple (Acer miyabei). The true species is of Japanese origin and, like Alan Leslie notes in Flora of Cambridgeshire, I think our plants are probably something else. The question is what? Potentially it is an unnamed alien form of Field Maple (Acer campestre), but possibly as with many planted 'native' hawthorns, dogwoods, Viburnums and hazels it could be of hybrid origin. Its a striking tree though, with large leaves, long petioles and large keys (glabrous in this case but they can be hairy). The second photo below contrasts it with typical field maple (var. campestre). 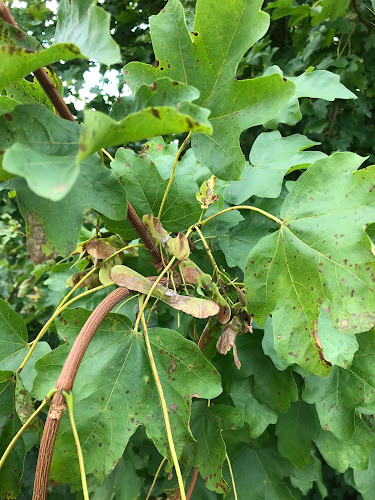 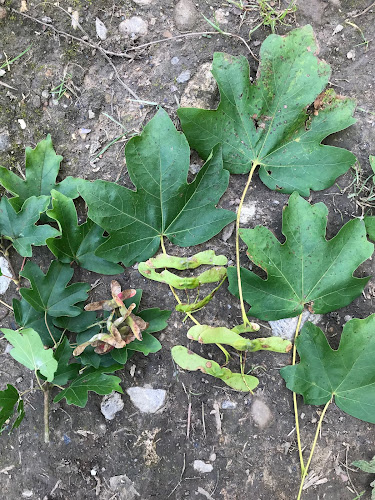 There was also Coralberry (Symphoricarpos orbiculatus) and  the hybrid hawthorn Crataegus x subsphaerica. The latter in this case had foliage closer to Common Hawthorn (Crataegus monogyna) but with clear hybrid vigour, but those elongate erect sepals give the game away. 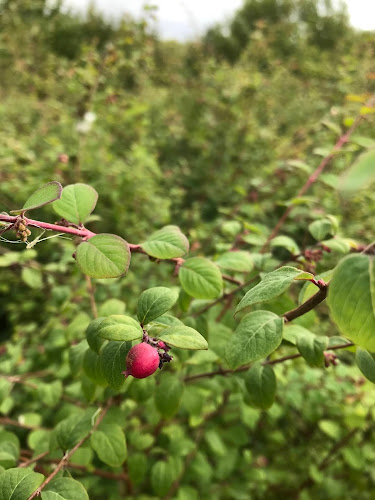 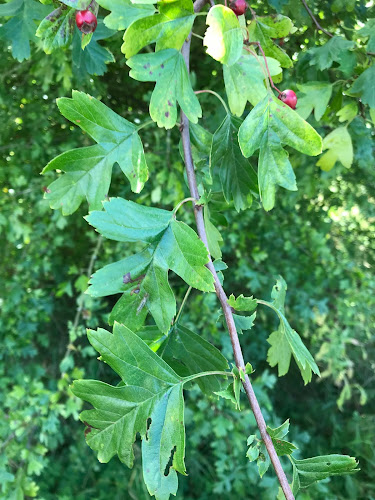 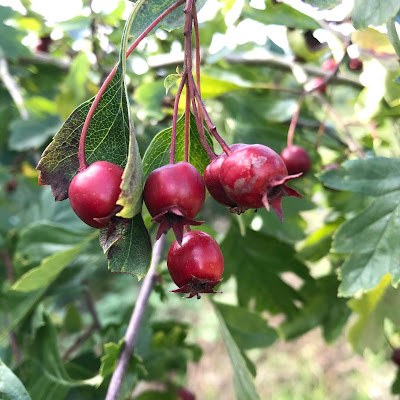 One final hawthorn brightened the walk home. Check out the haws on this Common Hawthorn, c. 13mm long by nearly that wide. Living up to its name of var. splendens. These large fruited bushes occur here and there amongst more typical plants. I'm not quite sure what to make of them (valid variety or just chance?), but they make a stunning sight in the autumn sunshine. The bottom photograph compares it with more typically sized haws from a neighbouring bush. 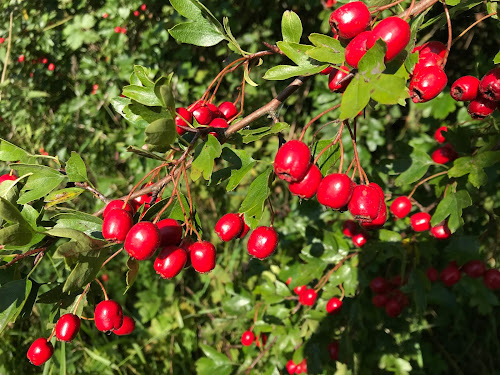 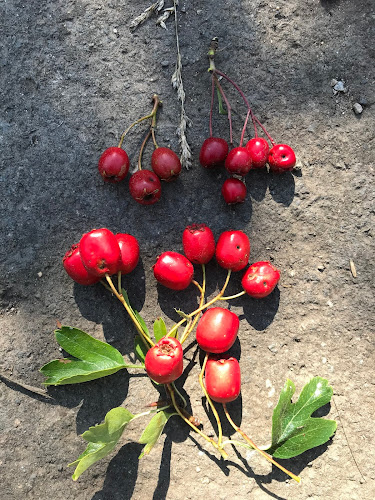 Posted by David Broughton at 21:23