Back in September I was poking along an arable field margin looking for Knotgrasses (Polygonum spp.), when I spotted a Fat-hen species that looked a bit unusual. It wasn't one of the typical variants of Fat-hen, being dwarf with a short leading stem, and multiple branches arising near the rootstock and spreading horizontally before ascending. The leaves were also very small, rather sparse and with no teeth or lobes on the margin.

I vaguely remembered an image of something that looked similar in Flora Nordica, and this along with the interesting new account of the genus in Sell & Murrell encouraged me to take it home for a closer look.

After a bit of background reading and looking at images online, I was reasonably satisfied that this was Small-leaved Fat-hen (Chenopodium striatiforme). Confirmed subsequently with the help of Dr John Akeroyd. This is a species that Continental botanists have been satisfied with for sometime, but until Sell & Murrell it was probably not a species most British and Irish Botanists were aware of. It is a distinct little species, rarely more than 40cm tall, and in this case less than 30cm.

Of course I was so desperate to get to my books that I forgot to photograph it in situ, and by the time I had finished looking at it the light was fading. But the following photograph should be adequate to give a flavour of the species and its distinctive form and foliage. I've propped it up with some of those pottery feet used to support plant pots, which indicates the small size of the plant. 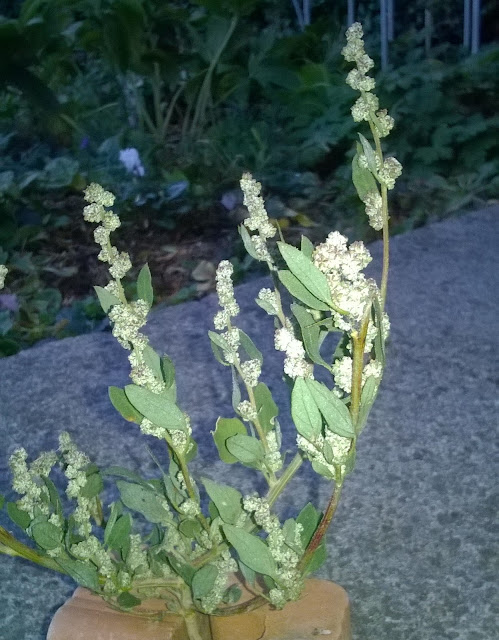 Rather better are these photographs sourced online. See here and here.

Posted by David Broughton at 15:46

Email ThisBlogThis!Share to TwitterShare to FacebookShare to Pinterest
Labels: Chenopodium